Another year in film has come and gone and, my, what a year it's been. The Academy Awards air live this Sunday February 27th and a lot of us will be front and center for all the action!

I'm saddened, once again to see a shit-ton of my favorite films totally snubbed in one way or another. Films like 'Get Low' which featured some of the greatest film work of Bill Murray and Robert Duvall to date...or 'The Town' which was yet another showcase of Ben Affleck's directing talents! Not too mention the absolute genius that was 'Enter the Void' or 'Scott Pilgrim vs. the World'! But, I digress...the Academy wants what the Academy wants. So in choosing this years possible winners I've stuck to the nominees even when making my own personal picks for favorites to win. Without further ado I give you my Academy Awards picks for the year AND as an added bonus, since I am the author of 'Lego Iconic' articles monthly here at CCD, I've included film art made up entirely of Lego  ....and dreams.

Best Original Song
should win: 'Toy Story 3' (Randy Newman)
will win: 'Country Strong
There's no match for Randy Newman. Ever. The man could write/sing about a bowl of pretzels that were sitting atop a bar for 3 months and have me hooked. That being said, I could definitely imagine the Academy giving an award to a song which is sung by the great Gwyneth Paltrow, just to get her bra-less nips on stage.
Best Original Score
should win: 'Inception' (Hans Zimmer)
will win: 'Social Network' (Trent Reznor)
I'm not afraid of a Trent Reznor win. That is probably a good thing for all of us but, 'Inception' just had a score that was talked about for weeks after the film was released, as having as many levels as the film itself. I couldn't get it out of my brain for days. Check into the 'Inception' score chatter via YouTube if you haven't already. It's sick what went into it.
Note: Daft Punk was snubbed for 'Tron: Legacy'. Their score was so memorable throughout that I think that without them the film would have had a completely different feel to it and I may not have liked it as much. Their score actually completely changed the feel of the film. I would imagine they were only NOT included in the list of nominees because of some kind of red tape bullshit that didn't allow for them to compete in this category.
Best Animated Feature Film
should win: 'How to Train Your Dragon'
will win: 'Toy Story 3'
Without having seen 'How to Train Your Dragon' the buzz surrounding it's originality and overall awesome-ness probably puts it just a hair above 'Toy Story 3' which is a bit of a rehash of the first two films. All said and done, I think the Academy will give this award to 'Toy Story 3' if for no other reason ..just so they don't have to recognize it as a winner in any of the other categories it is nominated for.
Best Writing, Screenplay Written Directly for the Screen
should win: Christopher Nolan
will win: Christopher Nolan
I CANNOT IMAGINE that the Academy would not only snub Nolan for a 'Best Director' nomination....but, than NOT give him the 'Best Screenplay' nod.  This script consisted of layers upon layers of work and also mirrored the layers of work a screenwriter creates for the movie itself out in the real world. This was by far the best script written this year. What script even comes close? 'The Fighter'? 'The Kids are All right'?....por favor.
Best Writing, Screenplay Based on Material Previously Produced or Published:
should win: '127 Hours'
will win: 'Social Network'
I would assume that this award will be given to 'Social Network' since it and 'Inception' became separated in this category and it's very easy to give them both these respective awards without skipping a beat. Personally, even without having seen it, I would assume '127 Hours' was a more personal, original piece of work. Just because we haven't seen a film based on the creators of Facebook until now, doesn't mean we haven't seen a film about a bunch of entitled, yet intelligent college kids a dozen times before.
Best Performance by an Actress in a Supporting Role:
should win: Melissa Leo
will win: Melissa Leo
I've only seen but one film in this category but I can't imagine ANY of these actresses churned out a rare awe-inspiring film moment in these supporting roles. Bonham Carter gave us something new from within herself as the role of the royal wife of Colin Firth's would-be king. Yet, Leo was breathtaking in her role on HBO's 'Treme' so I'll go with her. They're all great in their own way but, in the end I think the Academy, also, will just go with the Globes pick of Melissa Leo.
Best Performance by an Actor in a Supporting Role:
should win: Christian Bale
will win: Christian Bale
Christian Bale has proven himself as one of the best at what he does. He totally immerses himself in his work and BECOMES the person he's playing (as proven by that fact that he didn't even come out of character to yell at the stage hand that got in the middle of his 'Terminator: Salvation' scene and ruined the moment. He just kept yelling at him AS American John Connor) He has NO competition in this slot.
Best Performance by an Actress in a Leading Role:
should win: Jennifer Lawrence
will win: Natalie Portman
The Oscar buzz around Jennifer Lawrence for the film 'Winter's Bone' is probably well deserved but, I think the Academy will give it to Natalie Portman for this and her overall body (no pun intended) of work thus far rather than a new comer like Lawrence. She'll have her day to shine in the future. The 'buzz' from 'Winter's Bone' will see to that. 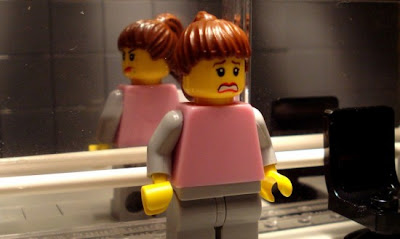 Best Performance by an Actor in a Leading Role:
should win: James Franco
will win: Colin Firth
Colin Firth was probably better last year in 'A Single Man'. Jeff bridges GOT HIS already last year for 'Crazy Heart'. Cut off your arm, look good doing it, and be an all around great actor to boot? Franco in '127 Hours' is a shoe-in but, alas, I think with  the buzz coming off some of the other awards, Colin Firth will steal this one for 'The King's Speech', anyway.
Best Achievement in Directing:
should win: Darren Aronofsky
will win: David Fincher
Since the true winner, Christopher Nolan was completely shut out of this one while handing in the most original piece of work that I've seen in at least a decade, I'm forced to choose Aronofsky who was equally amazing in his piece although not AS original. For the win, however, I think the Academy will go with Fincher since he and his 'Social Network' seem to be able to do NO wrong this year.
Think about this: Which film will you make certain will be in your DVD/Blu-Ray collection above all others? Which will you revisit to 3 and 4 times before you leave this earth? 'Social Network'?.... 'Black Swan'? or 'Inception'? '...Network' was a one trick pony compared to the other two in my opinion.
Best Motion Picture:
should in: 'Black Swan'
will win: 'Social Network'
While 'Inception' was probably my favorite film of the year, I realize that it's not for everyone. My mother would probably watch it and say 'Huh?'. Hell some of my closest friends did! While 'Social Network' was current and offered something for everyone...all in all it wasn't really anything new or cutting edge. It just WAS. 'Black Swan', however, succeeded in getting EVERYONE out of their homes for an Indie film which would normally go unnoticed by the masses. There literally was something for everyone in this film. Suspense, heightened sexuality, romance...all revolving around the ballet, of all things, which would usually appeal to only 1% of the population. 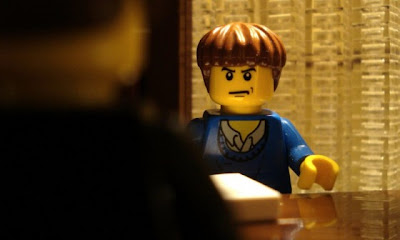 What's your picks? Disagree with Mike D or I...than tell us so....we love a good debate based on our love of cinema. But, most of all enjoy the Oscars....and go see and support more films!
..........and see more Lego Oscar art here and here!
Posted by JBond at 1:17 AM