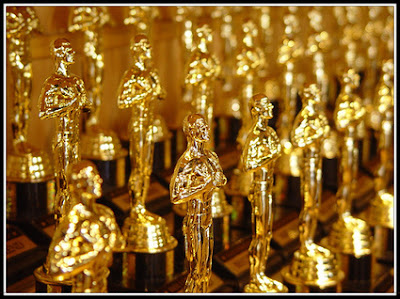 Another year in film has come and gone and, my, what a year it's been. The Academy Awards air live this Sunday February 27th and a lot of us will be front and center for all the action!

While my addiction to movies (via Netflix Instant or in the theater) is well documented on this blog, it should come as no surprise that I take the Oscars quite seriously. Why you ask? Because I know that they are a 50/50 representation of everything I love about film. They represent 50% of whats right with making films, and 50% of what sucks about the film making industry. Excellent films like 'Winter's Bone' (this year) and 'Frozen River' (2 years ago) would never be known to the public at all if not for the Oscar nods they got. Would 'The King's Speech really have made over $100 million if it wasn't Oscars darling this season? I think not. But it's not all roses. The Oscars also represent the conformity that is required in Hollywood to get the nominations, let alone win an Oscar. Honestly, how can you snub Chris Nolan for 'Best Director', or never nominate a horror film for any awards despite how wildly popular they are (check the numbers... horror makes bank, son). I have seen all 10 of this years 'Best Film' nominees, and frankly the only one I can see myself constantly revisiting would be 'Inception' and 'True Grit'. That's not to say I didn't like the others... I just didn't LOVE them. I saw plenty of other films this year that I did love (um... Scott Pilgrim anyone?), yet they are missing. So it goes.

Anyways, here are my pics for the 2011 Oscars. CCD jacks the show once again. Hope you enjoy the picks, and the awesome fan art that I took from over at Reelizer. It completes the deal. Enjoy!!!

Randy Newman is the man. That's that. The rest of these songs suck. Winner by reputation (but the song is good as well). My only regret is that this year has no 3-6 Mafia to embarrass the Academy with a 'Best Song' winner with a title like 'It's Hard Out Here For A Pimp'... that was classic.

This one is clear cut and, I feel, deserved. The music in 'The Social Network' made the movie flow... and Inception's music was great, but became grating at times. Where is Scott Pilgrim in this category??? LOL...

'How To...' is one of the greatest animated movies that I have ever seen. It was wonderful. While I liked the summing-up of the franchise that 'Toy Story 3' did, it pales in comparison to the originality and awesomeness of 'How To'. Why only 3 nominees though??? Silly, silly Academy....

They can't snub him any more than they have already, can they? People doubted he could ever top the success of 'The Dark Knight'. I for one feel he did with 'Inception' (and I LOVE 'The Dark Knight'). He better take this one down. I swear that if 'The Kids Are Alright' win I will kill somebody.


Best Writing, Screenplay Based on Material Previously Produced or Published:

Should win: True Grit
Will win: The Social Network

The Coen Brothers are gonna catch the hose on this one. They took a phenomenal book that was adapted, very poorly, years ago (the John Wayne version strays from the book a ton) and made the movie focus on the 14 year old star Hailee Steinfeld (like the novel). They also corrected the liberties that 'The Duke' took with Rooster Cogburn. And some book about the kid who started Facebook will blow all that hard work away... lol. This one is going to sting me... but 'The Social Network' is a worthy winner (just not the one I would have picked!!!)

God I hope they get this one right. This kid is special. How special? How about she got the part over 10,000 other first time actresses that the Coen Brothers PERSONALLY auditioned (how hands on are these fuckers?...wow!). She killed that role, held her own against Jeff Bridges & Matt Damon, and stole the whole goddamn movie! Melissa Leo was good, but she wasn't any better then her own Co-Star, Amy Adams. That should disqualify the two of them from gaining an upper hand over each other. I heard great things about 'Animal Kingdom', but Jacki Weaver got no shot. And if HB Carter is not playing a witch and/or some nutjob, I ain't interested. I'm taking the kid all the way!!!


Best Performance by an Actor in a Supporting Role:

I loved Hawkes in Winter's Bone and Renner in The Town, but they have no shot against 'The Dark Knight'. Mr Bale gives the impression that he actually dabbled in crack to play Dickey Eikland. Scratch that... not dabbled, gluttonized the pipe. Holy shit, there is no way he wasn't high. My one question is this: Where is Tom Hardy or Joseph Gordon Levitt's nomination(s) for 'Inception'? Those guys complimented Leo well, and I felt like Hardy at the least should have got one of the nods. But it wouldn't have mattered, cause Bale is gonna take this one in a landslide.


Best Performance by an Actress in a Leading Role:

I feel this is a two horse race. Annette Benning has no shot (what is this film doing so highly nominated? It was meh at best). And Jennifer Lawrence was wonderful, but not strong enough on her own. She was part of a truly solid cast. That hurts her individual chances. Kidman can not win for a movie that no one saw. Williams gave the performance of her career, and I can't believe how far she has come since hanging by the Creek with Dawson, Joey & Pacey. But Portman... man did she put herself into this role. She learned how to dance ballet, lost weight, and played psychotic pretty awesomely. Not to mention she got eaten like a #1 2 cheeseburger meal from Mickey D's by co-star Mila Kunis (that scene should get her a win on its jack off merit alone). I hope Portman takes this one down, but wouldn't be surprised to see Williams pop this bad boy.


Best Performance by an Actor in a Leading Role:

Jeff Bridges is a god. The Dude gets my vote no matter what. But it is going to be hard for the Academy to give it to him twice in a row. Last year was a shock for him, but this year he probably deserves it more and probably won't get it. Firth got the hose last year, so he might make a run here on the sympathy vote. Fuck James Franco. Nah, I'm kidding... I actually like Franco. But I don't see him trapped for 2 hours taking the prize. Eisenberg should not win shit because he was playing himself (a socially inept nerd). If Eminem didn't win for 8 Mile (in which he played himself as well), Jesse ain't got a chance. I did not see Biutiful, but heard it is great... so I'm going with Bardem. He is a hell of an actor, and supposedly he carries a great movie. But I'm pulling for Flynn... I really am. Mike D abides. 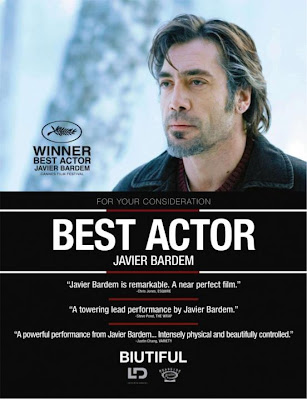 Best Achievement in Directing:
Should win: David Fincher
Will win: The Coen Brothers

I think the Academy has a soft spot for the Brothers Coen, as they should. These guys make hella good movies... and True Grit is no exception. They managed to up the ante of a classic film while being true to the source material. Now this (the film being a remake) will work against it in Best Film, Best Director is something different. Fincher killed it with The Social Network, and unfortunately he might get snubbed. But nothing is worse then snubbing Chris Nolan... so I am kind of ambivalent about this category. How can the category be valid if the guy who should win isn't even nominated? Boo... Boo I say!

I picked multiples in this category because there are 10 nominees. Good lawd this is tough!!! The Social Network is the fave going in, and Toy Story 3 is the dark horse (wouldn't that be something?). But I really thought Inception and True Grit were the best films of the year. The Academy doesn't treat Sci Fi movies and remakes very well, so those guys probably got no shot. Black Swan and The Fighter have the elements that Oscar loves (Underdog stories, weirdo characters, etc.) and I think The Fighter might pull this one out on the stregth of Chris Bale, Amy Adams and Melissa Leo's nominated performances. This is a tough one. Just as long as The Kids Are Alright doesn't win... how the fuck did this movie get nominated (mumbling to myself)...


So... lets see how it goes. Tell me what you think about my picks in the comment section below. Later!!!
Posted by Mike D. at 1:34 AM