Toys That Probably Should Not Exist by Joey Esq 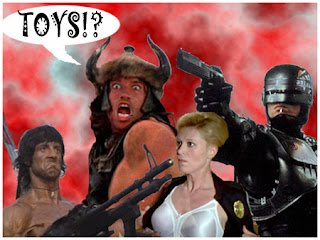 Hello CCD-ites! It's been awhile, but your boy JoeyEsq is back with another article about 80's toys to cure your Cultural Compulsive Disorder... if your particular disorder has to do with 80's toys that is. Now normally I write a feature here called "Takin' You Back... Way Back" in which I illuminate you on a forgotten yet totally awesome toy line from the 1980's, but in this one I'm taking a bit of a different approach. Today I'm focusing on a topic that has kinda fascinated me since I was young - toys based on movies that were totally not for kids. Don't get me wrong, I'm not knocking any of the movies below. In fact I love most of them. It's just kind of bizarre how many toy properties there are out there that were based on something no child had any business seeing. Check 'em out after the jump!


Rambo -  At some point in 1985, some executive in Coleco's toy division decided that a movie about a former Vietnam P.O.W. with severe post traumatic stress disorder would make the perfect basis for a cartoon and line of children's toys. This might sound like an insane idea, but you have to keep in mind, cocaine was a very popular drug in the 1980's. Now its true the toys were based more on the sequel than the original First Blood movie, but objectively speaking neither First Blood, which was a psychological thriller nor Rambo, which was violent as fuck, are anything a 6 year old should be watching, much less playing with toys derivative of them. But, Coleco ignored that blatant logic and thus Rambo and the Force of Freedom were born.

Coleco trying its hand at a boys military-themed toy was likely an attempt to cash-in on the popularity of G.I. Joe, but I still have to wonder how an idea like this gets past the "laughed at in the board room" phase. Rambo murders the fuck out of people in those movies! You can't just repackage him as the leader of a G.I. Joe-type team, make a colorful enemy team for him to fight  (S.A.V.A.G.E. - Specialist-Administrators of Vengeance, Anarchy and Global Extortion - I'm gonna sit here and giggle about that for a minute... hehe "specialist-administrators") and think that makes it ok. In any event, the toys and cartoon didn't last long enough to be controversial, as the whole thing was wrapped up by late 1986. I had a few of the figures, and definitely used their weapons for my C.O.P.S. figures at some point. Oh, and I also had the S.A.V.A.G.E. headquarters, which was cool as shit... to use with other, superior toy lines. 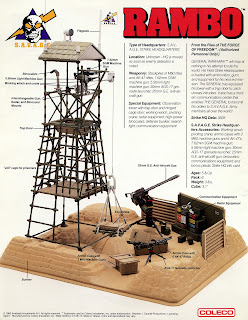 My Joes got a lot of use outta this thing
Oh, and in an interesting bit of trivia, the Rambo toys have another connection to G.I. Joe aside from attempting to sponge off of its success. See, in 1985 Stallone was in negotiations to have Rocky Balboa join the G.I. Joe team! The idea got so far that Larry Hama actually wrote a bio for him which appeared in G.I. Joe Order of Battle #2. Marvel ended up printing a retraction in issue #3 because, instead of licensing his likeness to Hasbro, Stallone went with Coleco and the Rambo line. Way to back a winner, Sly. Also, as a result of the deal falling through, the slot of celebrity member of the Joe team ended up going to William "Refrigerator" Perry. 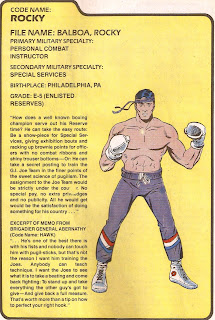 Robocop - Not to be outdone by Coleco, in 1989 Kenner said I'll see your adult themes and ultra-violence, and raise you a dystopian future, social commentary, brief nudity, drugs, attempted rape and whores! Robocop was not a kids movie by any stretch of the imagination, but did that stop Kenner from rolling out Robocop and the Ultra Police? Hell no it didn't. 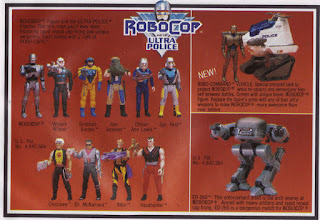 I wasn't a big fan of these toys. They had the articulation of a Star Wars figure, and by 1989, G.I. Joe had shown us all how an action figure should be able to move. Aside from that, the backs of the figures were taken up with a dumb cap-firing mechanism. I always hated gimmickry like this. It ruined the aesthetics of the figure, and quite frankly, I can make my own gun noises thank you very much. The villains looked like a bunch of rejects from Mad Max - I wanted a Clarence Boddicker figure, dammit! (Now that I think about it, I was 8 when Robocop came out... I NEVER should have been allowed to see that movie! Great job, parents!).Another thing I hated was that Kenner renamed ED-209 "ED-260". This really annoyed me as kid; and still kinda does, for no reason I can adequately explain. Being fair, the ED-260 toy at least was pretty cool looking. Moving on...
Police Academy - Another Kenner gem from the late 80's, only this time instead of making a toy line based on a violent gorefest, they went with a property known for it's raunchy humor and which featured plenty of naked lady boobs. Sure by the 4th or 5th movie, the series had degenerated from genuinely funny and adult-themed to completely over-the-top goofy, but still, the original Police Academy movie might have been the first place I ever saw boobs! It definitely wasn't something the target audience for these toys should be watching, or would even understand for that matter. But, they had a guy who could make crazy noises with his mouth (two if you count Bobcat Goldthwaite) so I guess its all good. 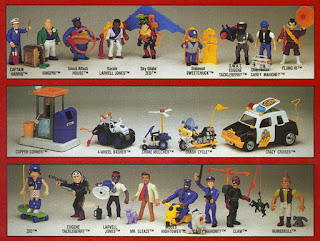 The toys themselves weren't all that great, as you can see above. Looking at these now, I can't even imagine a kid being interested in playing with these. I mean what are they supposed to do, reenact the scene where Sweetchuck falls down? Or where Tackleberry and Jones have a wacky misunderstanding? Or have the gang play pranks on Captain Harris? Fuck outta here. Ooh I know, you can play out the scene where that guy is tearing up the beach in his truck and causes those topless sunbathers to stand up and expose their boobs! No wait, you can't. They didn't make those figures. And speaking of which, where's Lasard? Where's Fackler and Hooks and Callahan? Where's the Blue Oyster playset? This toy line sucked.. and that Flung Hi figure up there is racist as fuck, even by late 80's standards.
Conan - Finally we come to Conan. I was sort of reluctant to include this one, since the fantasy setting kinda removes a layer of inappropriateness off the bat, but still Conan the Barbarian is super violent. pretty fucking gory, and contains whole bunch of sex and nudity. And yes, they toned down (ruined) things for Conan the Destroyer, and yes the toys were more so based on the comic book than the movies, but still its all related. and these guys belong on the list. 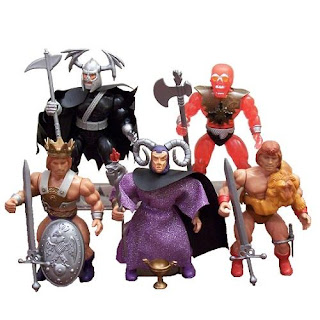 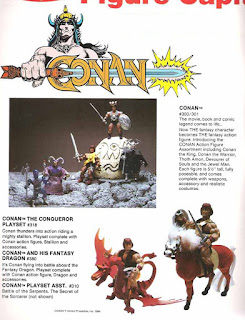 The figures, like most figures Remco produced in the early 80's, were designed to be compatible with He-Man (cough knockoffs cough). Funny thing about that is for the longest time, the urban legend was that Mattel originally intended to make Conan the Barbarian figures, but when the Mattel executives saw how violent the movie was, they backed out of the deal and then the concept evolved into He-Man. However, this rumor has recently been pretty soundly debunked. There WAS a licensing deal in place in 1981, but Mattel terminated it right around the time He-Man was released in early 1982. Conan Productions actually sued Mattel over it and lost because the development of the He-Man concept actually went all the way back to 1980, predating the agreement by quite some time. Despite that, most of the evidence suggests that the original designers and  conceptualizers of He-Man were at least somewhat influenced by (borrowed heavily from) Conan; particularly the artwork of Frank Frazetta and Boris Vallejo; both of whom produced many awesome Conan and Conan-like paintings. 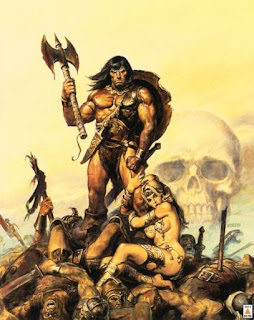 So there you have it, four toy lines that have no business existing, based on their source material. I was actually toying with including Ghostbusters and Gremlins in this list too, but changed my mind. I still argue that Ghostbusters is not a kids' movie, what with all the swearing and smoking, but compared to the violence and nudity on this list, it's a friggin Disney cartoon. Gremlins on the other hand probably does belong on here for the violence, over the top and comedic as it may be. But, aside from a few plush Mogwai and pvc figurines, it didn't actually have a proper toy line at all, and I'm not here to talk about stuffed dolls.

JoeyEsq is a lawyer by day, frustrated writer and artist by night. When he's not lawyering, you can find him battering criminals within inches of their lives on the streets of Hell's Kitchen or writing on his own blog, Perpetual Dissatisfaction
Posted by JoeyESQ at 2:23 AM