Wow... it's about time!!!! One of my favorite childhood TV shows is finally getting a box set, and it can't be soon enough! 'Monsters' aired back in the late 80's (88-91) and ran for three seasons ...to a total of 72 episodes. It was conceived in the vein of 'The Twilight Zone' & 'Tales From The Darkside', which it shared a producer with. The show was a week-to-week, self-contained horror fest that featured original stories as well as adaptions from great horror writers such a Stephen King and Robert Bloch. And it also featured a bunch of young actors BEFORE they were famous, such as Steve Buschemi, Tony Shaloub and Gina Gershon. It also featured one of the best introduction scenes in the history of TV... and if you don't remember it, check it out after the jump! Now the show is finally going to get the box set treatment, coming at the end of Feb 2014. I, for one, will be buying this one. I can't wait to share these scares with my 10 year old son.... I was his age when the show aired ...and I loved it. So I am interested to see if he likes it. Check out some clips after the jump... 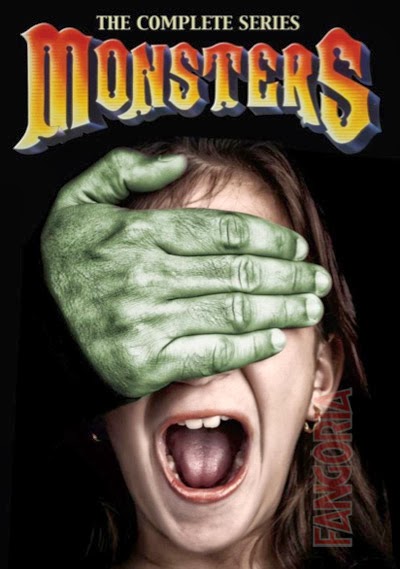 
You can stream a bunch of full episodes on The Monsters TV Youtube, but this remains one of my faves!