These days I seem to be talking more about the toys I DIDN'T have. When I was a kid I so wanted these action figures. I had all the other Big Jim stuff so these were a natural progression. I just never saw them in my local stores and even today I cannot find them on Ebay for a reasonable price in Euros (since all Big Jim figures seem to come from Europe these days).

Read More after the jump... 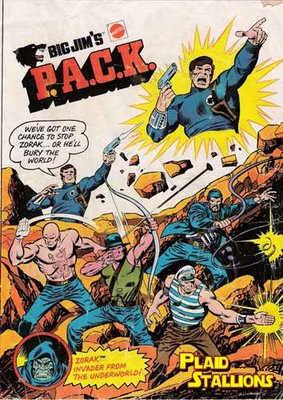 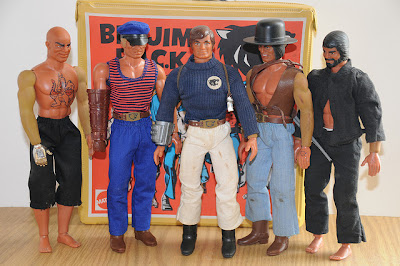 I had DR STEEL but he went missing with all my great G.I.Joes and Mego Superheroes when we came back from Europe (forever to be referred to as the GREAT DISASTER)

The WHIP had a ton of extra weapons and I always wanted one of the wrist communicators/home computers to wear over my turtle neck sweater with wolf emblem like BIG JIM had. The toy company even altered the shape of Jim's head, making it more square. Maybe this wasn't the same sports hero we had known anymore. 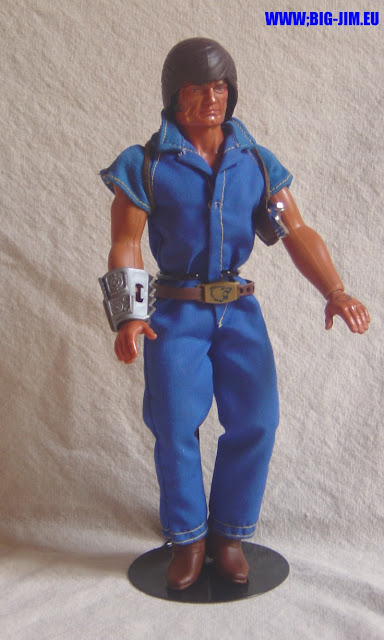 Instead of kicking the winning goal, Big Jim became a secret agent and a tough one to boot. He even wore a kickass communication device on his wrist that brought him information and allowed him to command his team from a distance. Why has no one come up with my wrist computer yet? 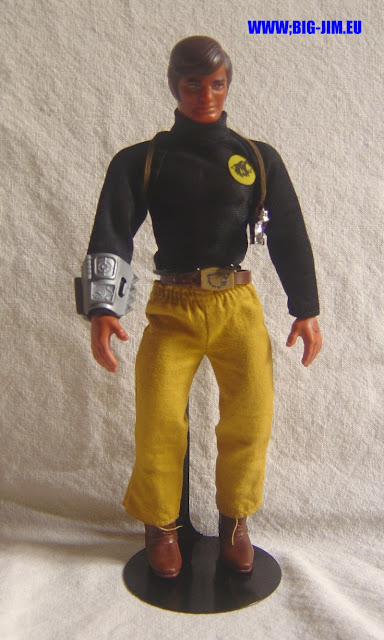 And when did BIG JIM become such a bad ass where four of the toughest action figures ever made would follow him?  I mean, this is the same action figure who went camping with his shirtless male friends in all the ads I have seen of him. Then one day he up and decides to be a super spy? I love the idea but you gotta give me some notice before you whip the concept around 180 degrees on me. 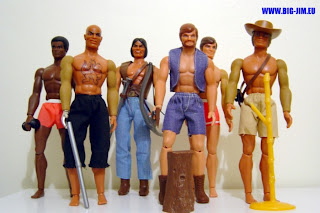 Each member of the P.A.C.K team had a cool look and cool accessories. Even their back stories were interesting. I know in later years they made an alien overlord to fight the P.A.C.K. but it was too little too late for the line to continue without drastic alterations. I imagine what cool villains they could have created. Personally I would have loved to see a female disguise artist who came with several masks, outfits and specialized weaponry. 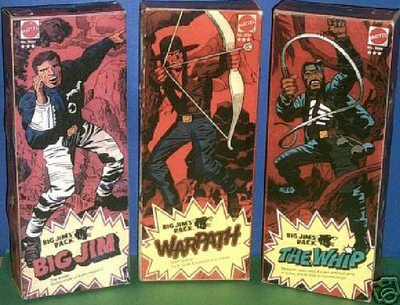 These boxes were designed by the King himself, Jack Kirby. 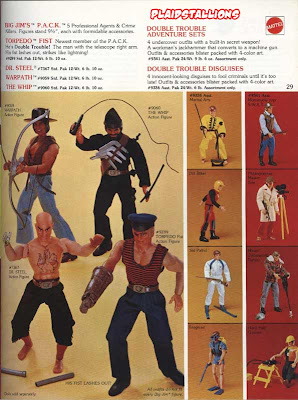 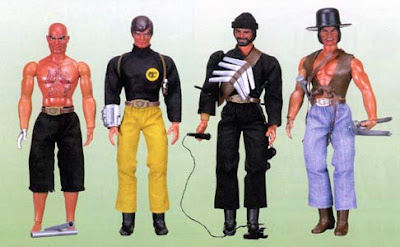 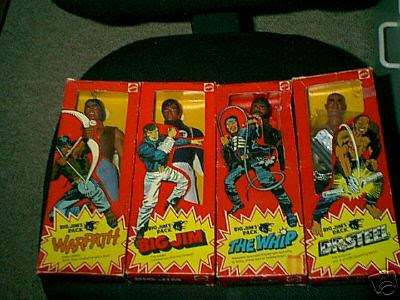 In 1975, Mattel decided to create an extension of the main toy line making Big Jim the leader of a Mission Impossible-like group of heroes for hire. This series is easy to identify because all related products have a howling wolf as its principal image. The members of the spy group were named P.A.C.K. which is an acronym derived from "Professional Agents – Crime Killers".

On its initial release, the series presented Jim as "Commander", this time as the leader of a counter intelligence strike team. He and two of his most loyal friends joins forces to against a hooded villain known as "Zorak, the ruler of the Underworld".

The first Zorak action figure was named Double Trouble Zorak, because he had a face-changing feature where his normal-looking head could be turned into a monstrous green visage. 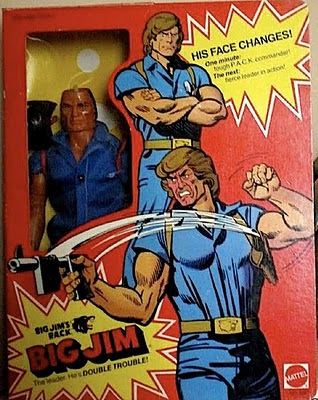 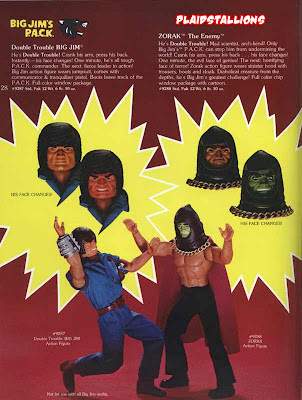 Dr. Steel – He came with a steel right hand and an iron pipe, and a big dragon tattoo on his chest. Most of the time, kids thought of him as being an evil villain for the first series, but it turned out he was also one of the good guys, as he re-appeared as an official member of the P.A.C.K. In other countries he remained as a villain however. I always had him play a good guy and his voice sounded just like Yul Brynner. I am sure they got the idea for this figure from The Ultimate Weapon. 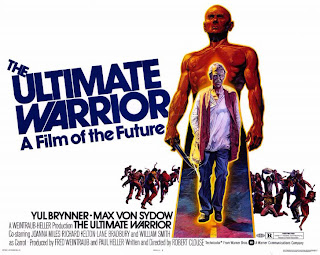 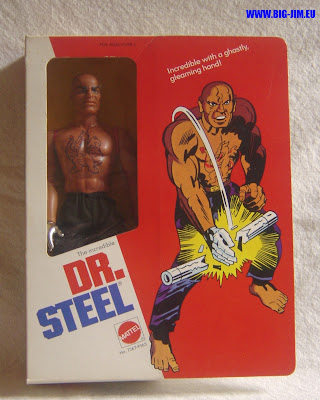 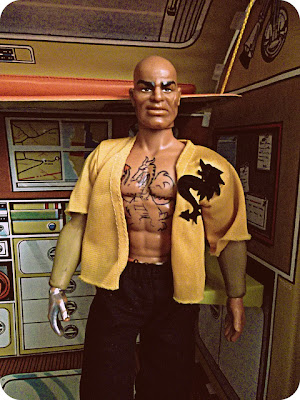 Warpath – He is Tankua with a different name. Exactly the same figure except Warpath comes with a cool 'Billy Jack' hat. 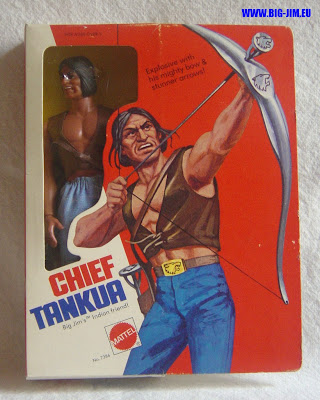 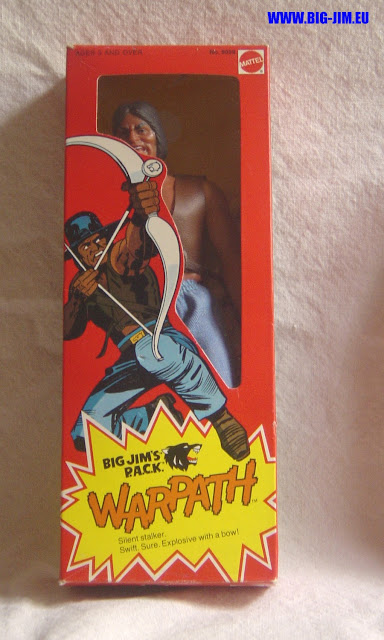 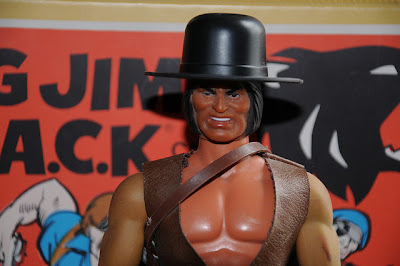 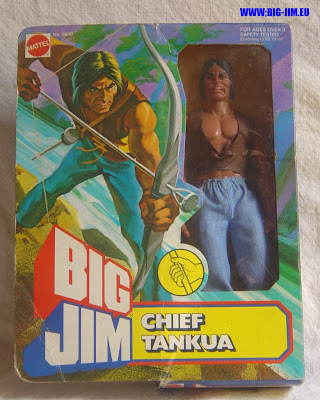 The Whip – A weapons specialist who masters all kind of weapons. He came with boomerangs, bola and whip, from which he takes the nickname. The Whip is one of the few Big Jim characters known for an alias instead of his real name. He comes with the most accessories - with wolfpack tattoo on left hand / black bearded figure / dressed in black pants – black vest – black commando hat – black boots – wolfpack belt / bandolero – whip – 3 boomerangs with braun chest belt – black chop stick – boomerang throwing device on right arm . 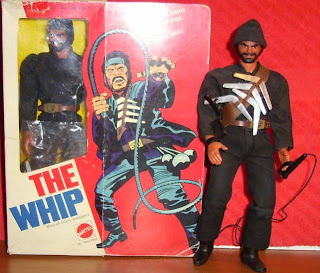 Torpedo Fist – Probably the strangest of all members of the P.A.C.K., he was the only one who had "superpowers". While all other members of the group were normal humans with no other special ability except their agility and normal strength, Torpedo has a telescopic cybernetic arm. Comes with wolfpack tattoo on left hand / dressed in blue pants – red + black striped shirt – blue hat – brown boots – wolfpack belt / came with expanding right arm, torpedo fist action . 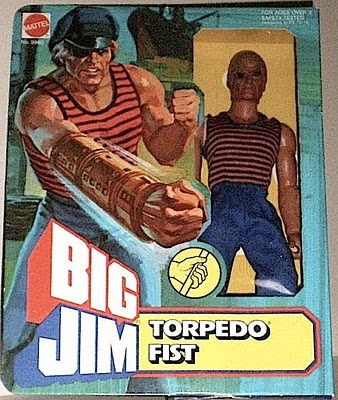 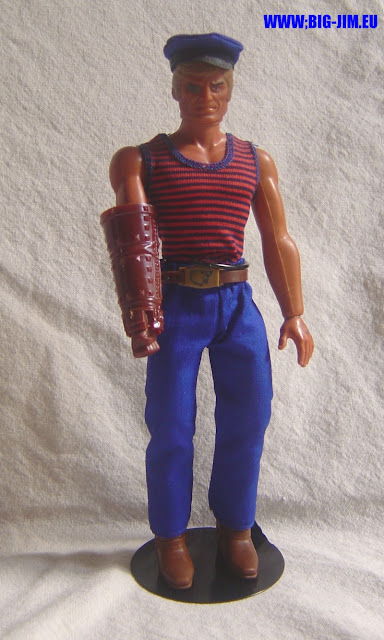 Zorak – A reputed scientist who performed several genetic experiments with his own body, until he finally became a major menace. He's mostly like The Hulk, who transforms into a monster. He was the villain in the P.A.C.K. series. Not to be confused with the unrelated character of the same name from Space Ghost. He came with two faces which can be changed from normal into a Hulk like villain / dressed in black pants and red cloak with gold chains – black boots. 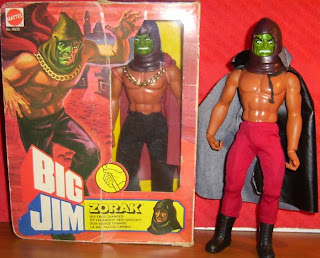 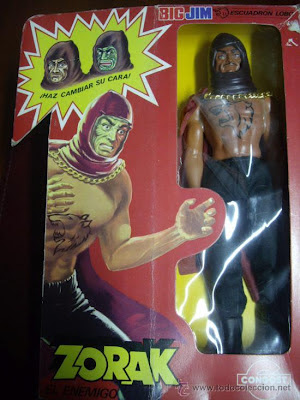 The line came with vehicles, of course. I love that a super spy organization is driving around in truck camper. Calling it THE BEAST makes it seem just that less hillbilly. Apparently Zorak did a lot of his mischief 'off road'. 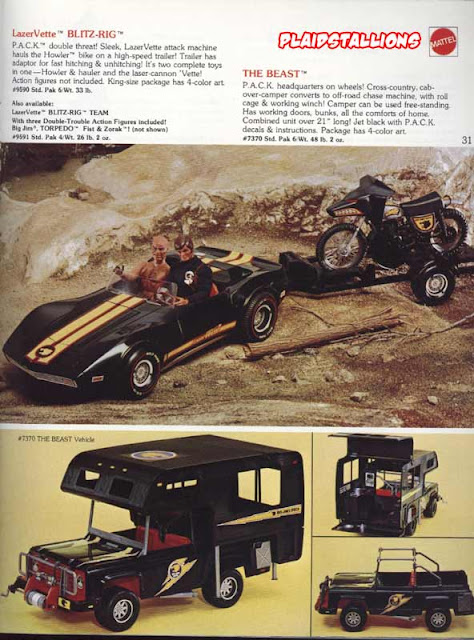 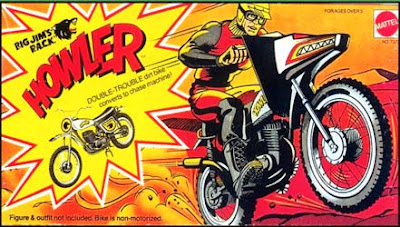