Yo CCDers! Your boy JoeyEsq is back with more obscure 80's toy goodness! Now everyone remain calm, your eyes are not deceiving you, this really is the second "Takin You Back..." in as many weeks. I have no real explanation for this sudden burst of creativity and inspiration, but lets not question it too much and just enjoy the ride. Ok? Great! 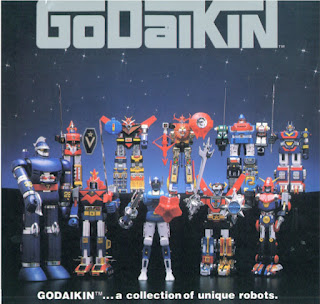 This week's topic is so obscure that before I did the research for this article, I didn't even know what the toys were called! Seriously, I started gathering the info by typing "Japanese robots" into a google image search and scouring the results for something that looked familar. I wanted to write about toys I had actually owned for this week's article because to be honest, it was a little difficult to write about Inhumanoids  last time since, aside from one figure, I never actually owned or played with any of them. Now you might be asking yourself how its possible that the same nerd who still remembered the words to the theme song from Vytor: Starfire Champion twenty-five years after the first and last time he heard it could possibly have owned a series of toys that he didn't even know the name of. Well, as I've revealed in previous articles, I was a spoiled little bastard, and just going by sheer volume of toys that passed through  my hands, one was bound to slip through the cracks. That toy series was GoDaiKin. 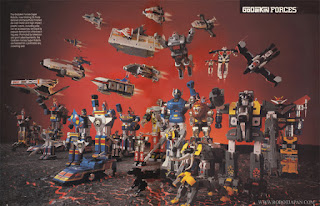 GoDaiKin was a line of giant robot toys released by Bandai America between 1982 and 1985. The GoDaiKin line was actually composed of figures from two Japanese toy lines, Chogokin and Popinika. They were essentially huge, Japanese robots, between 10 and 12 inches in height in robot mode, which I assure you to a kid is positively tremendous. They came in large boxes with carrying handles on the sides.  The name is a combination of the Japanese words for "alloy" (gokin) and "big" (dai).  DAIIII! 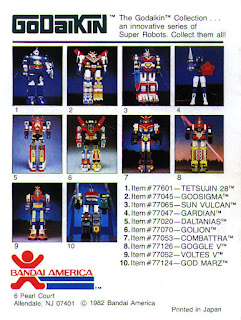 The initial release of GoDaiKin Deluxe robots was a series of ten different figures. Each one had unique action features that included spring loaded missle launchers, and seperating down into smaller robots or vehicles. The ten figures that comprised the GoDaiKin line were Tetsujin, Godsigma, Sun Vulcan, Gardian, Daltanias, GoLion, Combattra, Goggle V, Voltes V, and God Marz. Of these, I had Godsigma and Gardian (or so I learned just now!) both of whom I got from my grandparents. One I'm pretty sure was a Christmas gift. The other I vividly remember getting as I picked him out myself. Now, being a spoiled kid, I had a lot of traditions that related to me getting some kind of toy. Traditions like say, random trips to the toy store just for going to my grandparent's house every Saturday. Another of these traditions was that my grandparents (see a trend here?) would take me to Toys R Us on my last day of school as a reward for getting promoted to the next grade. The haul on grade school promotion day was obviously bigger than just a random Saturday toy store trip, however and on a sunny June afternoon in 1986, after I completed 2nd grade, I came home from Toys R Us with a giant box containing my second awesome GoDaiKin toy. 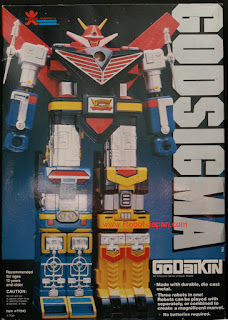 Godsigma was three robots in one. I got this guy for Christmas in 1985 and I remember being really fascinated with it. It  had a lot of cool parts and weapons, and it was almost like a Transformer combiner. I was also really intrigued because it wasn't a toy I was familiar with, which left a blank slate for me to do whatever I wanted with him. This would actually start a trend with me where I stopped playing with toys like they were "supposed" to be, and just made up my own storylines. Godsigma is actually made up of three robots and a ship. God Sigma's right leg is the blue robot Ocean King; his left leg is Land King, the yellow robot; Thunder King is the body and head of God Sigma, and Big Wing is the ship. 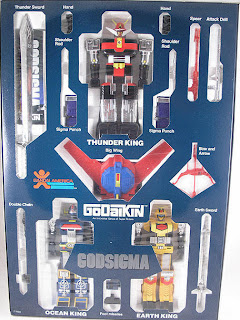 Unfortunately, as far as playability goes, there wasn't much. GodSigma had almost no articulation and was kinda thick and clunky. Still I give him props for being one of the first non-mainstream, non-American toys to ever grace my lving room. 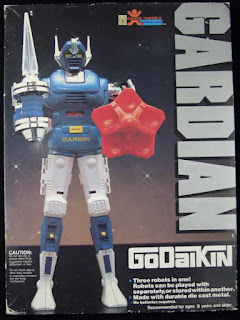 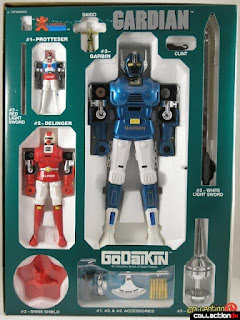 The GoDaiKin figure I got for getting promoted to the 3rd grade was called Gardian. Gardian was a giant robot, that was really three robots in one (hey just like GodSigma!). Only instead of forming limbs of a much a larger robot, these guys nested one inside another, like those little Russian doll things. The giant robot was named Garbin, the middle one Delinger and the smallest Protteser. When they formed together, they became Gardian, although that seems kind of strange to me since Gardian is really Garbin but with the other two inside of him. The robots also came with Daigo, the rubber pilot figure who fit inside the Protteser robot, and Clint, Daigo’s cybernetic leopard. I remember the articulation being particularly good, especially in the arms (which when fully combined were really arms, within arms, within arms). I also really liked the wide array of swords, axes and missiles this guy came with. I could probably say more about him, but really the pics I’m including with this article speak for themselves (much thanks to the various websites I’m stealing, err, uh borrowing them from). My research shows that toy itself actually dated from 1979, and was merchandised from an Anime series called “Gordian Warrior”, but six-year-old Joey didn’t know that so Gardian, like Godsigma, got relegated to my Transformers box. I distinctly remember using Clint as Ravage, in fact. 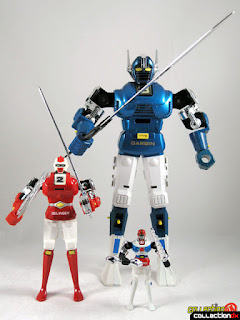 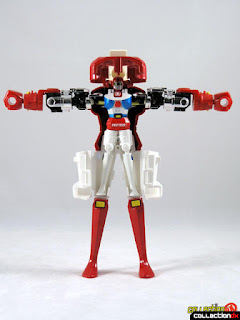 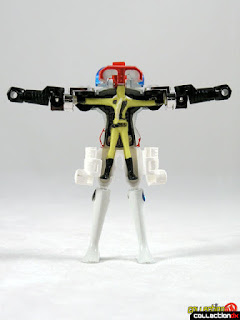 Unfortunately, as these things were probably more aimed at collectors than kids, both Godsigma and Gardian were kinda fragile and not made to withstand being played with. Not the way I played with my toys, anyway. They both broke and lost limbs and pieces until eventually, the remains of both Godsigma and Gardian wound up being donated to Tommy’s box of Junkion parts. That’s right, they ended up in my best friend’s box of parts used to simulated Wreck-Gar’s planet of junk. Not the most auspicious end for two really cool looking robots, and just another reason I lament not taking better care of my toys when I was a kid. 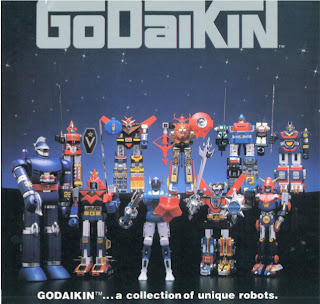 Obviously, GoDaiKin failed to take off here in the U.S. Bandai America had no American facilities for manufacturing figures, so they were imported from Japan in just the styrofoam to Bandai's New Jersey US Headquarters, where they were placed inside the new boxes. The large size of the toys, the expense of their construction, and the freight costs of shipping them over to America led to the toys being really expensive; some having a retail price of around US $80 - which as we learned in last week's column, is around $43,000.00 dollars today. Now, if we've learned anything from my "Takin You Back..." columns, it's that a high price point will kill a toyline dead in a matter of minutes. It's like pouring drano in a fishtank. When you think about it, it makes sense too. As much as I like to joke about cheap parents, when your choice is one giant robot with weird Japanese writing on the box, or approximately SEVENTY FOUR G.I. Joe figures, it's really not a choice at all.

Bandai introduced a smaller range of figures alongside the next batch of Deluxes for its second series of figures, but the writing was already on the wall. Competition from cheaper, more popular robot toys like Transformers and GoBots, and the fact that (say it with me) GoDaiKin had no cartoon tie-in to promote it (because the robots themselves were drawn from a whole bunch of different anime series - some of which had actually aired in America in different forms already), meant a short stay on the shelves of aisle 7C... 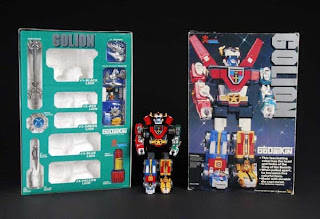 ...With of course, the exception of GoLion. Some of you observant readers might have noticed a familiar looking dude hanging out in some of the group shots up at the top of this article. Some of you might have even said "Obscure toys? Joey doesn't know what the fuck he's talking about, that's Voltron!" Well you've got some attitude mister! Yes, smartypants, you're right, that IS Voltron. I don't really want to talk much about Voltron here because along with G.I. Joe, Transformers, Star Wars, He-Man, and possibly Thundercats, Voltron is one of the most enduring, popular and well-known toys of not just the 80's, but all time. But for a quick history lesson,  Matchbox imported the Lion Force Voltron from Popy (a subsidiary of Bandai) in 1984. In Japan he was known as Beastking GoLion, and actually made it to America in that form via the first series of GoDaiKin robots as well as repurposed as Voltron. The footage from the GoLion series was heavily edited to create what we Americans knew as the Voltron cartoon.  Changes made to the series included rewritten dialogue, omitted character deaths, toned-down violence, and some altered plot developments. I actually thought I owned the GoLion version of Voltron too, but I was wrong... I owned a BOOTLEG of the GoLion version, purchased at the Aqueduct fleamarket, also in 1985. That bootleg was called Lionbot! 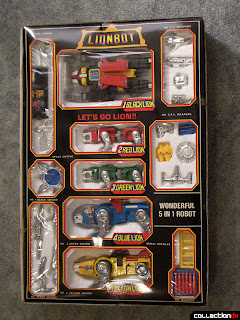 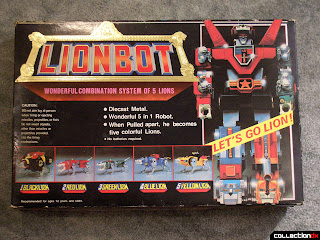 Well this was fun. By the way GoDaiKin were far from the only imported Japanese robots that made it to mainstream toy store shelves in the 80's. The success of Transformers and to a (much) lesser (as in red-headed stepchild lesser) extent, Go-Bots, meant that toy manufacturers and importers were practically tripping over themselves to make Japanses products available over here. And so were bootleggers. I feel like I could probably do a whole other article on bootleg Transformers alone, so I'm gonna shut up now and save that topic for a future article, but as a little tease, I leave you with this image: 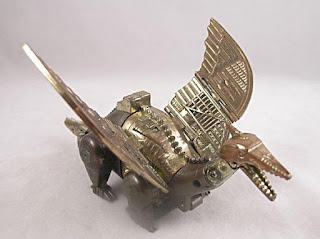 Me Sludge, confused...
JoeyEsq has been bootlegged and imported to Japan. You can catch his latest adventures on his own blog, Perpetual Dissatisfaction. Big thanks to www.CollectionDX.com from whom I robbed most of these photos!
Posted by JoeyESQ at 12:49 PM