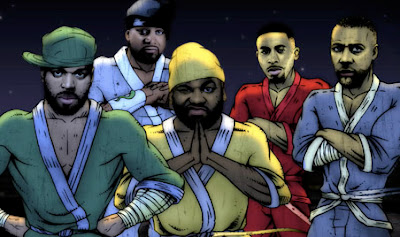 It's Wu Tang Wednesday son!!!! Ok, its Thursday... but whatever. Here is the video for Raekwon's House of Flying Daggers off of Only Built For Cuban Linx Pt. II. I know this song and album are over a year and a half old, but I have never seen it (because MTV & BET don't show videos no more!!!)and really love the album. The Wu uses a cartoon/motion comic strategy for this one, and the track is from the late great J Dilla. Dilla is even resurrected in cartoon form for this one. Rae is joined by some of the hardest hitters of the Wu: Ghostface, Inspectah Deck, Method Man, and  Gza. They bring the martial arts movie classic "The 5 Deadly Venoms" alive in this animated masterpiece that I just had to share with all of you. Long live the Wu!!!!