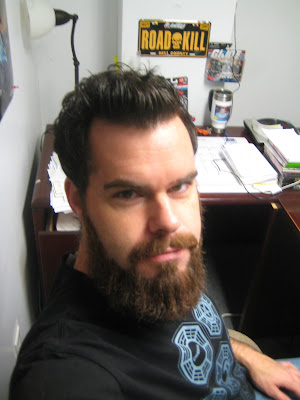 
- 'Inception': A brilliant Mindf*ck. Chris Nolan is the director of the decade!

- 'Scott Pilgrim vs. The World': One of the best but, also the most underrated film of the year

- 'The Expendables':  I've been imagining a film including all of the action stars I grew up with for a long long time. The success of this one means that sequels will surely follow with the cast of characters becoming more and more impressive.)

Lego Mini figures: Such a brilliant idea on Lego's part. One of my favorite things about buying Lego, since I was 4 or 5 years old, is to get my hands on the Mini figs that come with each set. Lego decided to create dozens of Mini Figures and package them separately and enigmatically, like baseball cards,  so that they're a surprise each time. The fun part of this is that it gives Lego the opportunity to release figures like a zombie, a roman gladiator, clown, luchadore or even Dracula that wouldn't be so simple to build a whole series around. Fun to trade with friends...or create an army of clown clones! Pure genius

7) New Technology that you acquired in 2010:
3-D Bluray Player and LED TV. I'm in no way a 'Techy' I'm just happy to move my 29in TV back into the bedroom where it belongs and watch TV like a human after my 48in LCD burnt out 2 years ago.

Female: Katy Perry...hands down. Coolest chick ever. She makes fun music and loves to dress accordingly. She's got the sense of humor of good pal and even married one one of the coolest guys. You'd think I'd hate him for it but, how could one dislike Russel Brand?

Male: Tom Hardy! You might remember him from small parts in 'Layer Cake' and 'RocknRolla' but his first big film 'Bronson' may have been the most inspired work I've seen in a decade from anyone. In addition he steals the shine from every co-star in every film he's a part of. His character in 'Inception' was so quick tongued and brilliant. Both his style and responses to the press are classic. He's rumored to be off to the new Mad Max film these days but, he's guaranteed the top 'dramatic/action star' seat in Hollywood for an unforeseeable future.

Female: I gotta say, I'm probably not wishing death on any women this year. Women REALLY have to be up to something paralyzingly obnoxious to make me THAT mad at them because, let's face it, they still have the parts I need! If I HAD to choose, though, I guess it'd have to be Heidi Montag from 'The Hills'. I didn't even remember her name and had to look her up...that's how insignificant she should be to everyone! She makes Paris Hilton look like natural born talent who's famous for doing something in comparison. Her every move is a publicity stunt to keep her in some sort of spotlight. Wishing her death via plane crash is probably something she has planned already, herself, for more notoriety.


Male: Michael Bay...every year...until his demise. That's it. I only focus on 1 person at a time until the deed is done. Ask your friends why Heath Ledger is dead.
Posted by Mike D. at 2:04 PM