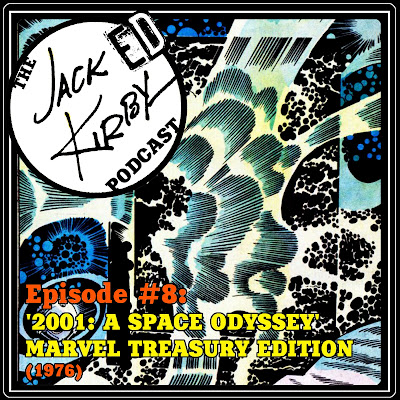 Mike D & Tommy are joined by artist Joe Milazzo to discuss Jack's adaption to the film 2001: A Space Odyssey (Marvel Treasury Edition 1976). The original film and book were huge hits in 1968 upon release, and Marvel turned to their returning "King" to finally adapt it in 1976. Instead of going with a traditional comic adaption, they decided to allow him to take on an over-sized Treasury Edition to capture all the awesome visuals in a way only he can. And he got to write this adaption as well... always a point of contention among Kirby fans and critics alike. Join us for our review of one of Jack's most visually stunning creations...

(22:11 - 27:21) - Kirby's crazy layouts and love of splash pages makes the Treasury Edition a perfect place for Kirby to create art.

(50:01 - 57:02 - Jack uses a familiar character design from a past character in designing his spacesuits for this one.... and some familiar political tropes from today pop up too!

Kirby Konnections
(pictures that accompany the episode... check em out)