Lionsgate is a Canadian independent film production/distribution company that just so happens to be the most successful mini-major studio in North America. It has been key in the development of some of the greatest franchises over the last 20 years... think Twilight, Hunger Games, Saw, etc. But it has always been a key contributor to the horror genre, and boy have they added some classics through the years. American Psycho, Hostel, the many Texas Chainsaw Massacre reboots (I would argue they are the BEST reboots out of all the horror reboots), High Tension, The Midnight Meat Train, You're Next, The aforementioned Saw films, Cabin In The Woods and House of a 1,000 Corpses/The Devil's Rejects are just a few of the banging horror movies that Lionsgate have put out over the last 25 years. So when it came time for the people who control Lionsgate's Instagram/Facebook accounts (they have a ton of FBook accounts for each specific movie and their Instagram covers all their releases), they dug deep into their own personal character archive to compile a 'Who's Who' list of the most heinous monsters & madman for a fake movie entitled 'Fright Club'! What a great idea... take some of the worst baddies ever and have them take on innocent victims in a winner take all fight club type of setting... I WOULD WATCH THE SHIT OUT OF THAT! They tapped Patrick Bateman, the horned helmet dude from Hostel, Jigsaw, Otis, Leatherface, the ballerina girl from Cabin in the Woods, as well as a few more (I think those little kids under Bateman are from The Strangers, but I could be wrong)... oh, and is that the famous Leprechaun lurking in the shadows??? A great idea for a perfect April Fools joke. The coolest thing for an April Fools joke is if people truly believe it... and just by checking out the comments on the posts you can see just how much people either believe this or wish it could be true! Great work Lionsgate. Check out the full poster after the jump.... 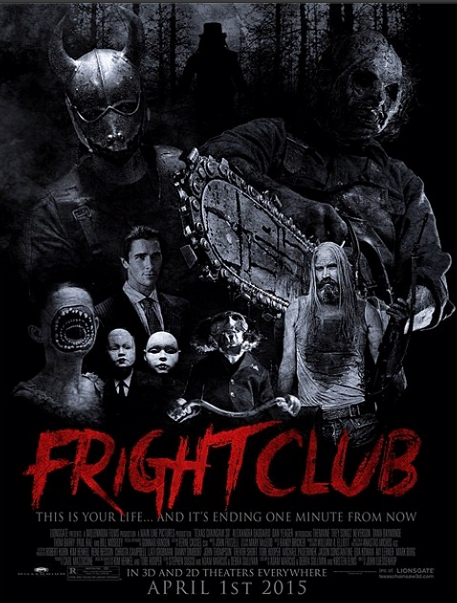