I don't know about this one... but sometimes when you have a loyalty to the first film in a series you almost feel obligated to give sequels a chance. Wolf Creek is the latest film to get a late coming sequel, this one coming almost a decade after the release of the 1st film. The original Wolf Creek was one of my favorite horror films of the 2000s, and I didn't even mind the 'based on true events' bullshit tag that was slapped on it by director Greg McLean when it came out. Instead of being about one particular case, it took elements of a bunch of different murder cases in Australia's history and filmed at real locations around the Outback for authenticity. It worked, as the 'three tourists get kidnapped by a madman in the middle of nowhere' plot worked to a creepy perfectness. The main character of the movie is the enigmatic Mick Lynch, played to psychotic perfection by John Jarratt. Mick is a disgusting, horrible individual who is obviously bored out of his mind being by himself in the Outback... so what better way to entertain himself then to kidnap and tortue some folks? Sounds like a beautiful plot to me. And it worked... well. I love that movie. But the sequel??? I'm not sure... or maybe it can be great? Check out the synopsis, movie poster and trailer after the jump...

The Australian outback is a lonely, isolated place—the perfect playground for a sadistic serial killer with a penchant for bloodthirsty sport. A red wasteland, the stifling, oppressive heat isn’t the only menace that should be feared. Bored with the so-called commercial tourism of the city, young and idealistic backpackers Rutger and Katarina yearn to explore the “real” Australia and travel to the hauntingly beautiful but desolate Wolf Creek National Park. Far from civilization, the breathtaking vistas and vast open spaces belie a danger lurking in the shadows. Psychopathic pigshooter Mick Taylor is the last man any outback traveler wants to meet and now his irreverent attitude towards human life has escalated to a sadistic new level. Wolf Creek 2 will have your pulse racing. Paralyzed with fear, we all bear witness as Mick offers no mercy to his victims. 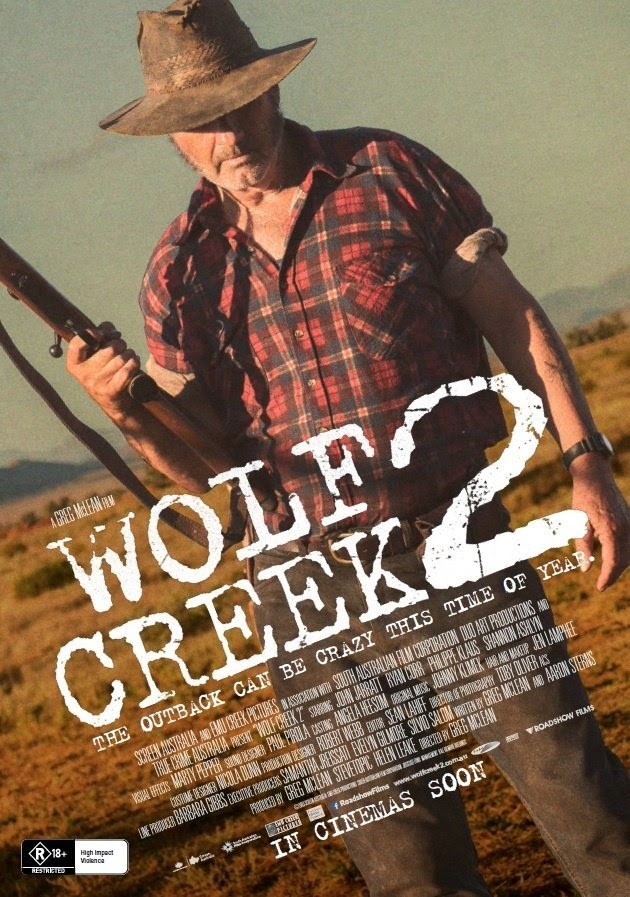 Now this is where I do see possible potential. I like that they didn't ADD victims, which is the usual MO of a horror film. Three people were terrorized by Mick in the first film... and that would usually mean that there would be NO LESS THAN 10 VICTIMS in the sequel. But McLean has only gone with what seems like two main targets in WC 2. That is great.

Also, this may be McLean's Evil Dead 2, in the sense that Sam Raimi was a young, inexperienced director with a tiny budget & some great ideas when he made Evil Dead. But when it was successful, Raimi decided to basically 'Do Over' the original movie in Part 2, just add more to the story through additions to the budget and having more filmmaking help from the studio. He basically just fleshed out the first film, instead of making a totally original sequel. And it worked... well. McLean has only made one other movie (Rogue in 2007) besides Wolf Creek. And I am sure he knows he has a classic character on his hands in Mick... so he doesn't really want to waste him. This is his shot to make a tighter film, a deeper character study of Mick, and something that feels a bit more personal and fulfilling of a film. I can only hope this is the case.

The movie was released internationally last summer, but it gets a statewide release on May 16th, 2014. It will be release VOD and as well get a limited theatrical release. I will be checking in on it... how about you???
Posted by Mike D. at 1:04 PM