Today's edition of Takin You Back... Way Back is one I've been sitting on for a long time; one of my favorite of the forgotten toy lines of the 1980's, C.O.P.S. The acronym stood for Central Organization of Police Specialists, and the tagline was "Fighting Crime in a Future Time". This awesome toy line produced by Hasbro debuted in 1988 and to me really closed out the "80's era" of boys toys, as attention would shortly shift to Ninja Turtles and Power Rangers, and things were never the same afterward. Technically TMNT is an 80's toy line as well, but I won't be discussing it here, not only because the Turtles are about as far from "forgotten" as you can get, but also because there's something about the Ninja Turtles toys and cartoon that just screams early 90's to me, and thus it falls outside the scope of these articles. No, today we're gonna talk about C.O.P.S., the last great action figure line of the 1980's.


The full name of the toy line was "C.O.P.S. n' Crooks" but even the toy commercials just referred to it as "C.O.P.S."  One of the awesome things about these figures was that they were constructed exactly like the greatest action figures of all time, G.I. Joes. Only they took it a step further because instead of being 3 & 3/4" inches tall, C.O.P.S were 6" figures. And they had wrist articulation, unlike their smaller G.I. Joe cousins. This made for some extremely poseable, really cool looking toys. I guess bigger didn't necessarily mean better though, because C.O.P.S. only lasted 2 waves of figures and  barely made it through 1989 on toy store shelves. But the stuff  they did give us was among the best this magical decade had to offer.
The premise behind the series was that in the year 2020, crime was rampant in Empire City. Big Boss and his gang of crooks were running roughshod over the Empire City police and as a last resort, the mayor was forced to request federal assistance. Unlike in the real world, getting the federal government involved got results for Empire City, in the form of special agent BP "Bullet Proof" Vess (get it?).  During one of his early encounters with Big Boss's henchman, Vess is badly wounded to point where his torso and legs need to be rebuilt with enhanced cybernetics, making him Bulletproof for real. Realizing that he cannot tackle the Big Boss problem alone, Vess recruits some of the best law enforcement agents from around the country. In addition to Bulletproof, the original team were:
PJ O'Malley, codename:  Longarm - Empire City Police sergeant and Bulletproof's second in command. Longarm was uniformed like a normal cop and wore a device on his wrist that fired a handcuff... that he was somehow able to aim and catch crooks by their wrists. This was one of my favorite things as a kid, but now that I think about it, logistically, its kinda dumb. Because how would that work??
Rex Pointer, codename: Bowser. I hope you like punny names by the way. Bowser was a K-9 officer from Chicago. He was partnered with a robot police dog named Blitz.

Walker Calhoun, codename: Sundown. A Texas Ranger who dressed the part, he had high-tech six guns and a lasso.
Colt Howards, codename: Mace. A SWAT officer from the Philadelphia Police Department. Had a really cool laser bazooka.

David E. Harlson, codename: Highway. A former member of the California highway patrol. A motorcycle cop. Named David E. Harlson. SEE WHAT THEY DID THERE?? It gets worse...
Donnie Brooks (see?), codename: Hardtop. Another Empire City cop, he drives the Ironsides vehicle, which is the future version of a patrol car.
Stan Hyde, codename: Barricade. A riot cop from the Detroit police department. He came with a riot shield and "MULE" device used for ramming back a crowd.
Hugh S. Forward, codename:  Bullseye. The C.O.P.S helicopter pilot, originally from the Miami police department.

All of the figures came with cap-firing accessories - giant guns, jet packs or anything else they could cram a spring-loaded hammer mechanism into. Even as a kid, I never liked these. They were too gimmicky, and made the weapons ungainly and burdensome.  I always used the secondary accessories like the side arms and nightsticks, and actually supplemented those with weapons from the Rambo figures, which were really great and realistic looking. My toy-playing had, uhhh matured by 1988, and I remember trying to have grittier storylines when I played with my C.O.P.S. Murder investigations, scandals, political intrigue, drug smuggling, etc. Anything my 10 year old brain could conjure up (or copy flat out from B movies I would sneak and watch on late-night HBO or WHT).
Which is pretty silly in hindsight, since the villains - Big Boss' Crooks - were some of the goofiest characters ever created. When I was younger I thought Big Boss was just a rip off of Marvel's Kingpin, only with hair and a cybernetic hand. And in a sense, he was, but they also threw a little Edward G. Robinson into the character's speech, just to liven things up. Oh, and he had a half-cybernetic pet weasel named Scratch. Come to think of it, quite a few of the Crooks had a prohibition-era vibe to their costumes despite the fact that setting was 2020 Empire City. The Crooks really were a strange bunch:
Barney L. Fatheringhouse, a.k.a. Berserko - Big Boss's dim-witted nephew and the Crooks resident thug.
Edmund Scarry, a.k.a Rock Krusher - The Crooks' strongman and perpetual jail-bird. He uses his cap-firing jackhammer to break into bank vaults.

Ted Stavely. a.k.a. Turbo Tutone - Big Boss' getaway driver.
Dr. Percival "Percy" Cranial a.k.a. Dr. Badvibes - A mad scientist who works for Big Boss making robots and other inventions to help commit crimes. Bad Vibes had an awesome look, with the top of his head replaced by a clear dome, so you could see his cybernetically enhanced brain.
Constantine Saunders a.k.a. Buttons McBoomBoom. Big Boss' cybernetically enhanced hit man. McBoomBoom dresses like a 1920's gangster in a suit and fedora, and has twin barreled machine guns in his chest. When he opens his coat, he also opens fire. Aside from his internal weaponry he carries around a futuristic tommy gun inside a violin case. Buttons was my favorite character.

In addition to these characters, the cartoon had 4 female cast members,  two C.O.P.S. and two Crooks, who never got made as figures. The C.O.P.S. were Tina Cassidy, codename: Mainframe; Empire City Police Department computer specialist, and Susie Young, codename: Mirage; a San Francisco vice cop. The Crooks were Stephanie Demeanor, a.k.a Ms. Demeanor; a lady criminal with super strength and a bodybuilder physique, and Raefella Diamond, a.k.a. Nightshade, a cat burglar.

Wave 2 followed in 1989 with more C.O.P.S. and Crooks figures, but still no sign of the females. 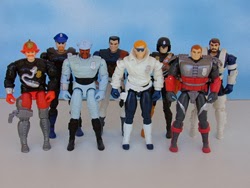 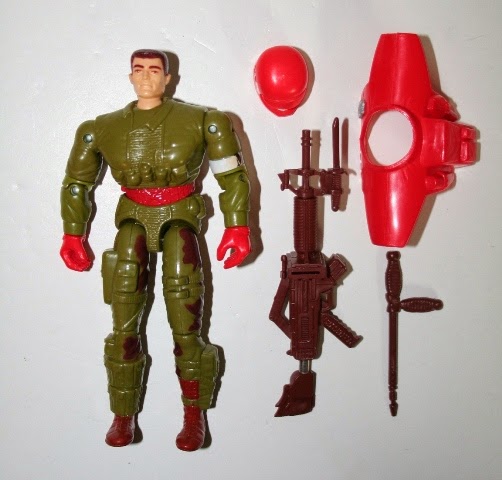 Hey, I wonder why New York got snubbed when it came to the C.O.P.S. recruiting? 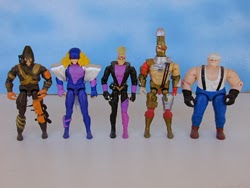 The new Crooks, from left to right, were:
Bullit a.k.a. Tom E. Gunn, a.k.a. A. Senal; This guy was a walking ammunitions dump, and in the cartoon wore rocket shoes to ram his bullet shaped helmet into safes.
Hyena a.k.a Hardy Haha, a.k.a.Chester Jester, a.k.a. Joe Kerr, a.k.a. T. Hee; This dude's pretty much a Joker wannabe, right down to the high voltage joy buzzer.
Koo-Koo a.k.a. Alfred C. Fore, a.k.a. Thyme D. Laye, a.k.a. Francis X. Plosion, a.k.a. Levon O'clock; a clock obsessed time bomb expert.
Nightmare the Android, a.k.a.Cyrus Borg, a.k.a. Manny Partz, a.k.a. Jerry Rig; A mechanical monster created by Dr. Badvibes.
Louie the Plumber, a.k.a. M.R. Fixit, a.k.a. I. Beam, a.k.a. Two-Penny Nail, a.k.a. Brad D. Wall; Another of my favorites just because he's so weird. He's an all around Crooks handyman and carries a pneumatic nail gun to fight off the C.O.P.S.
The line was augmented with a whole bunch of vehicles, but it never got a playset, which is unfortunate because a C.O.P.S. headquarters or something would've been awesome. The line did have some nice vehicles though, my favorite of which was the ATAC paddy wagon. 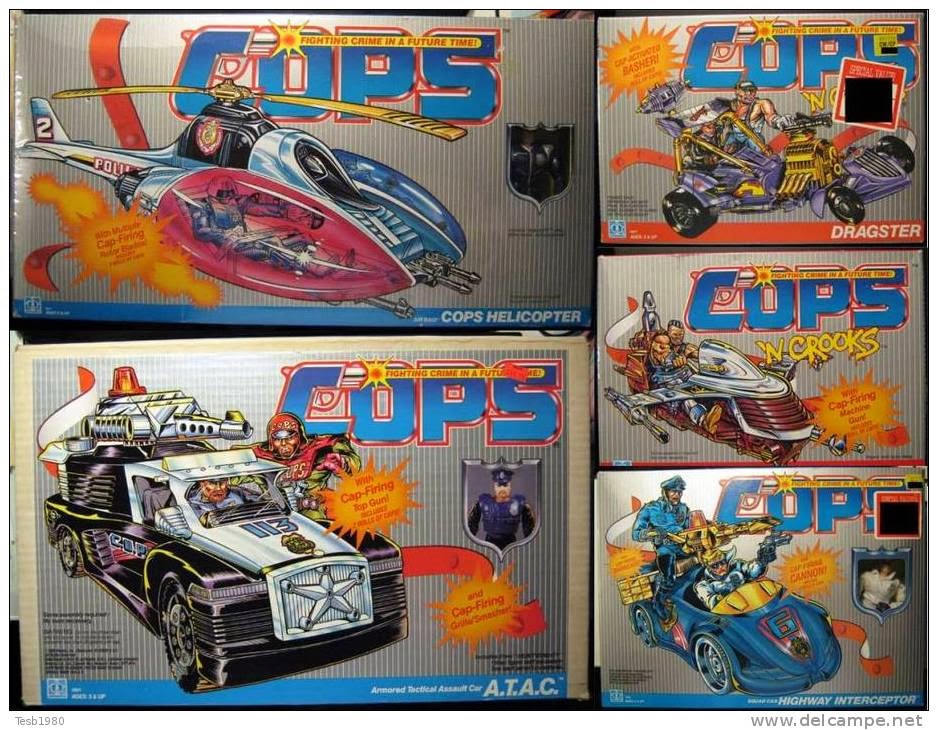 A third series of C.O.P.S. n Crooks was planned but never released. The figures did show up in the 1989 Hasbro Catalog and looked to be the usual eclectic mix of weird heroes and weirder villains that was standard for this series of toys. I'd love to know what these guys real names were. Unfortunately it was not to be and these figures never came out. 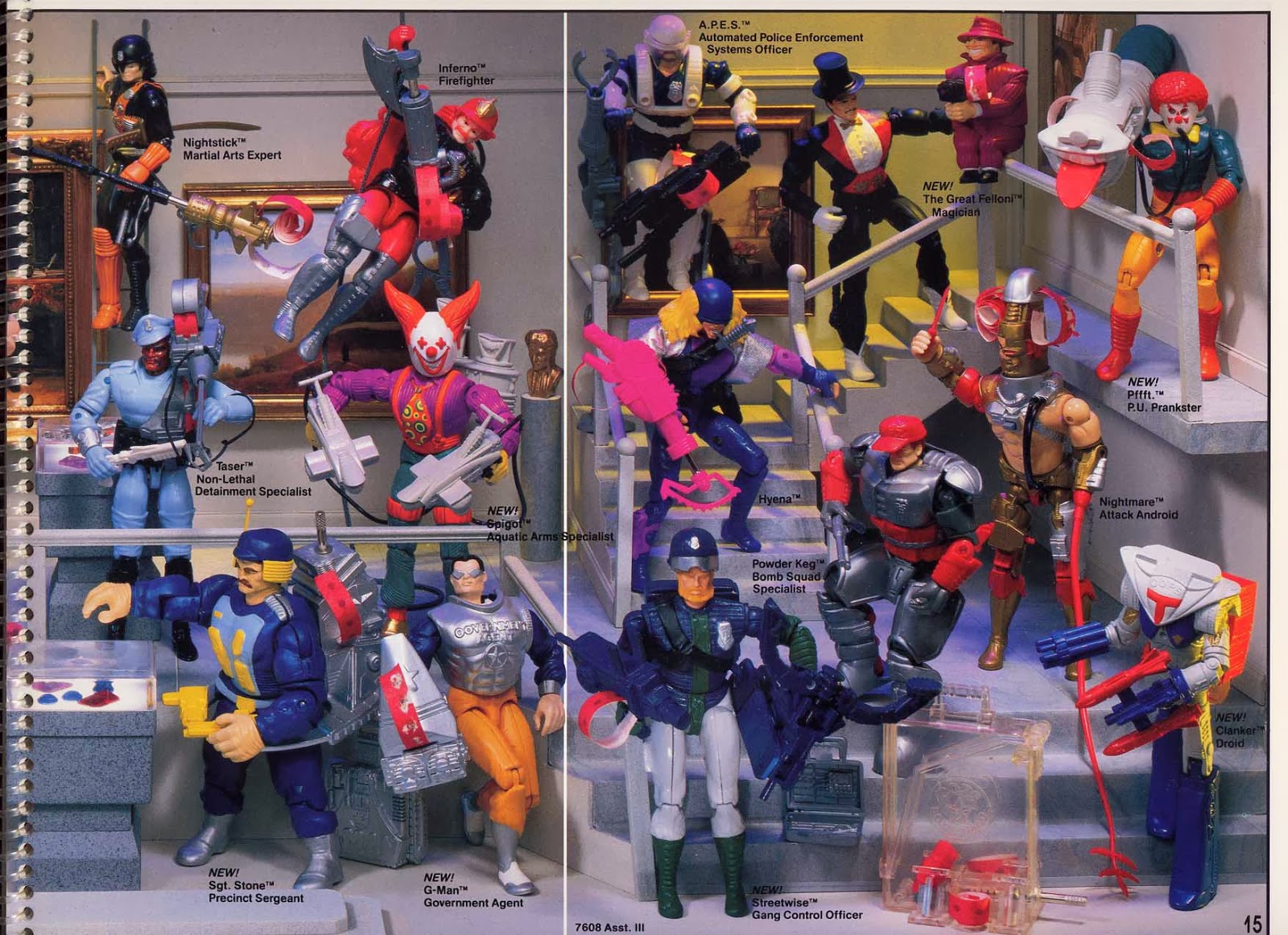 By 1990 I think pretty much anything that wasn't Teenage Mutant Ninja Turtles was doomed to be dead on arrival (with the exception of G.I. Joe, which still had a few good years left). C.O.P.S had everything going for it too. Cool concept, excellent figures, a cartoon AND a DC comic book to promote it. The cartoon was pretty standard fare for an 80's toy property. Not great, but not terrible either. One thing that bothered me, then and now, is that the cartoon character models looked very different from Bart Sears' designs on the toys, which was an annoying disconnect that, while probably isn't what caused the line to fail, it didn't help. I remember the comic book being pretty good though, and I think I still have all 15 issues somewhere. 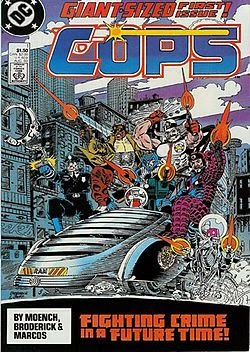 Oh and the intro theme song to the cartoon kicked all kinds of ass...
As did the closing credits...
Like it's way more successful cousin, the aforementioned G.I. Joe, the file cards for the C.O.P.S and Crooks were all written by Larry Hama. In fact if you're a particularly tremendous nerd, you noticed that Checkpoint's backstory, and real name, implies that he's the son of G.I. Joe mainstay, Beachhead. Adding to the comic-booky coolness, the package art (and actually all the original character designs themselves) were done by Bart Sears, Mark Pennington, and McNabb Studios. Sadly, the toy sales just weren't there, and C.O.P.S found its way to the discount bins sooner rather than later, which sucks because the series really had a hell of a lot of potential.
For a bonus "Way Back" I just thought I'd take a quick minute here to throw in another forgotten 80's toy line - Construx. Construx was a building toy released by Fisher Price in 1983. It  featured beam-like pieces of varying lengths that snapped onto cube-shaped connectors in order to build large frame-like shapes. Panels snapped on that let you add flat surfaces to the frames, allowing you to build anything from action-figure sized furniture, to walls to whole structures. Hinges, motors, wheels, and other movable parts expanded the number of different shapes that could be built, and even made moving creations and vehicles possible. This very cool line was discontinued in 1988. 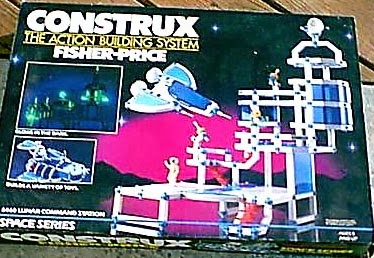 So what the hell am I bringing it up here for? Well, since the line was discontinued, and thus heavily discounted in '88, I happened to get a whole bunch of them right around the time C.O.P.S. was one of the main things I was playing with. Now I told you earlier that C.O.P.S. didn't have any play sets right? Well thanks to Construx, that meant nothing in my living room. It also meant that the vast majority of my C.O.P.S storylines took place in abandoned construction sites, since mostly what I was capable of putting together at 10 years old looked like a framed-out, incomplete building. But Constux definitely added a lot of play value to my C.O.P.S. figures, so I thought I'd share because they were a pretty great toy in their own right.
And to close this thing out, here's some great C.O.P.S. commercials!

Thanks for taking this stroll down memory lane with me. My previous Takin' You Back... Way Back columns are linked below. Check them out!

JoeyEsq is a particularly tremendous nerd, and when he's not fighting crime in a future time, he can be found occasionally posting on his own blog, Perpetual Dissatisfaction
Posted by JoeyESQ at 12:14 PM