Deadpool vs Ambush Bug by Ross

Ross is doing God's work over at his Blogspot account by creating faux comic book team up covers with MS Paint that would make any fanboy squee with joy. He started out doing Brave and The Bold covers featuring Batman and someone else, then he transitioned to Marvel Team-Ups with The Thing and someone else. Now he is doing Super Team Family team ups, which in effect don't tie him to a main character like the previous endeavors he undertook. Now he has freedom to choose BOTH characters in his fictional mash-ups, and boy is this leading to some good ones. The Watcher & Star Wars? Ant Man & Animal Man? Wonder Woman & She Hulk? The Lizard & Killer Croc? Rorshach & The Avengers? Yup all of these sound and are great... and exist on Ross's awesome site. but the one that stood out to me the best had to be Ambush Bug vs Deadpool cover that he did recently. Why? I am not really sure... probably because it would be a very funny comic to read. Deadpool is a lunatic, and Ambush Bug has always been a secret fave of mine. Plus they both break the 4th wall, so wouldn't be cool to see them both talking to & about the readers AT THE SAME TIME!!! That would be so epic. Click after the jump to see the cover in all its glory... 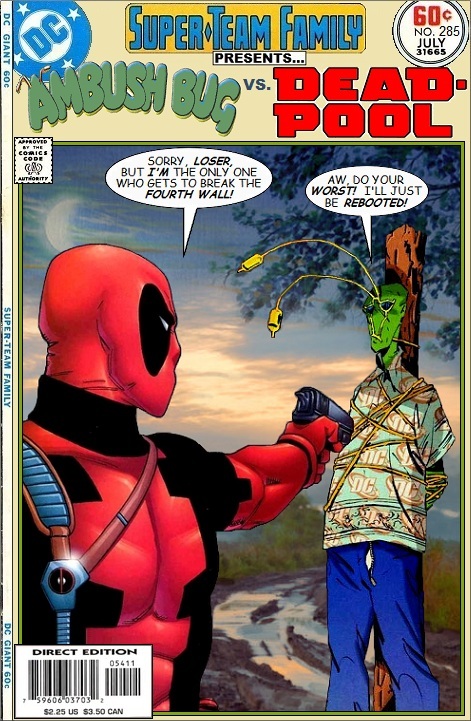