Wow... wow. In this era of sequels and franchises dominating the movie industry, how is it possible that we do not have an Incredibles 2 movie as of yet? This doesn't really make sense when you think of the fact that there is a Cars 2 and a bunch of those Chiuaua movies, yet no movement on the Pixar classic superhero story? Why lord, why!!! Anyway, an artist from The Netherlands (Edwin Rhemrev) has decided to put an end to this travesty himself. He has designed a shit ton of concept art for a proposed sequel, and it is spreading around the 'Net like wild fire. If you are a fan of The Incredibles , you need to continue after the jump to have your mind blown...

Here is what Rhemrev had to say about his project:


"Finally I present you guys my top secret personal project: The Incredibles 2!'WHAT?! Incredibles 2 artwork?! Is Pixar working on a sequel?!'Well, not exactly. Let me explain.
A couple of months ago I was watching Pixar's 'The Incredibles' again, and started wondering wether a sequel would ever be made, and how awesome it would be to do visual development for such a project.But, as I don't really have (director) Brad Bird or Pixar on speeddial, I decided to just start development on this fictive project myself, and see where it would lead me." 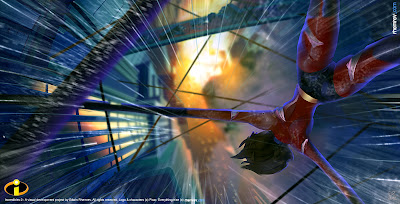