Takin You Back... Way Back: All Horror Week Edition

Hi kids! I’ve come out of retirement (from my laziness and lack of motivation) to bring you a special Halloween edition of Takin’ You Back… Way Back! Before we get into today’s featured forgotten 80’s toy line, I want to talk about Halloween for a quick minute. Halloween was never my favorite holiday, but looking back it definitely holds a special place in my heart. See, I was a spoiled kid. Like real spoiled. I mean, my parents occasionally told me no, which meant there were some months I didn’t get to go to Toys R Us. Or, there would have been if I didn’t have four grandparents for whom the word “no” simply didn’t exist when it came to the wants of their first-born grandson. Click after the jump to read more...


Now when it came to Halloween, spoiled little Joey didn’t have to settle for no shitty store-bought “costumes” (you know the ones I mean; horrible, uncomfortable plastic masks with the rubber band that dug into your cheeks and pulled your hair, and cheap plastic smocks with the picture of the character you were supposed to be on it). Nope, about a month before Halloween, Joey went to Fabric Bonanza with Mommy and Nanny Marie and got to pick his costume out from a book of patterns. Then his Nanny Marie (who is a very talented seamstress) would make his costume for him from scratch. The end result was that every year, my costume was better than yours. Another thing that was great about Halloween was I would get presents from both of my grandmothers. Not on the level of Christmas, or Springtime Christmas (what you might commonly call Easter), but the gifts were way better than just some stupid candy. I distinctly remember getting the Autobot Ironhide and Skeletor’s robot horse Nightstalker in 1986, and The Legend of Zelda in 1987. See? Spoiled. This story had no real point, by the way, I just wanted to do some Halloween-related bragging.  Man I miss my childhood. Anyway, on to today’s spooky-themed forgotten 80’s toy line… SUPERNATURALS! 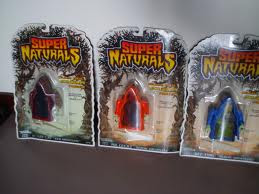 SUPERNATURALS: In 1986 Tonka took a stab at an action figure line. This was something of an odd move considering that prior to Supernaturals, Tonka was best known for its line of realistic construction vehicles... which were awesome, by the way. They were huge, they looked just like the real trucks, and weighed about as much as too. An 8 year old could honestly do some severe skull trauma with a properly hurled Tonka dump truck, I'm just sayin. As a toyline, Supernaturals was kind of all over the place. There were 6 large figures who stood about 6" tall and 8 "ghostlings" which were 4" little hooded figues with articulated arms. 4 of the figures (Lionheart, Skull, Burnheart and Snakebite) had a medieval armorish theme to them. Another, who still sort of fit the theme was an obvious clone of Thor (Thunderbolt) and the final figure (Eagle Eye) looks like a reject from a village people audition with his buckskin outfit and feather headdress. The ghostlings were shorter, squatter figures who had way less personality (and articulation) than the bigger guys so I don't have much to say about them.

They're about to bust into YMCA any minute, I can just feel it...


According to the packaging, the story of the Supernaturals went like this. "For centuries the Tomb of Doom remained sealed. Its location was long forgotten, as were the horrors that it contained. Recently it was rediscovered and its seal was broken. The spirits that it contained were unleashed upon the earth. Thus begins the battle of the Super Naturals". And there's your Haloween tie-in kids (in case you're that dense and can't figure it out yet); the Supernaturals were ghosts! Lionheart was the leader of the good guys and Skull was the leader of the bad guys. 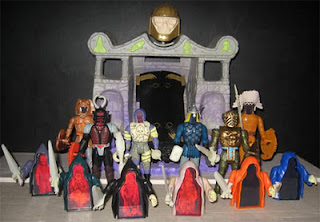 The gimmick of the toys was that they had these really neat 3-D holograms underneath their armor. The holgrams had two stages. Depending on which angle you looked at the toy from, the image would change. Each character had some sort of spirit "alter-ego" (Lionheart turned from a human knight into an actual lion, etc.). The ghostlings also had two-stage holograms, and all the figures had glow in the dark weapons to add to the spookiness. 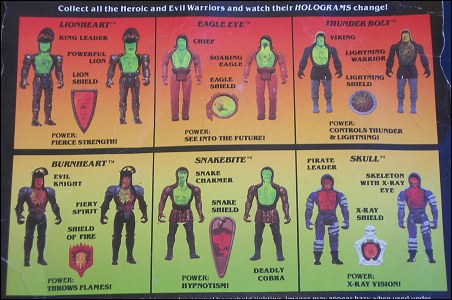 The Supernaturals line also had 2 steeds (a dragon and a winged lion), 2 vehicles (monster trucks for some reason) and the Tomb of Doom playset. This is what I meant about this line being kinda all over the place; you've got knights, an indian, a pirate, Thor, and various weird little ghosts driving around in monster trucks and stuff... it just made very little sense, and I remember even as a kid, that kinda turned me off to these toys. I ended up using the ones I had to beef up my He-Man collection. 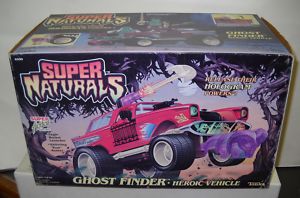 This makes no sense

Supernaturals' escape from the Tomb of Doom was extremely short-lived. Like most toy lines in the 80's with no cartoon or comic to support it, it died a relatively quick death and vanished from the shelves of aisle 7-C almost as quickly as they arrived. But who knows, The Supernaturals could be planning their next escape from the Tomb even as I type this, and they just might show up to haunt YOU! MWAHAHAHAHAHAH!! Ugh.. Happy Halloween kids!

JoeyEsq often changes to fight with ghostly might. When he's not here at CCD wishing he was still a 6 year old, you can find him ranting and raving on his own blog, Perpetual Dissatisfaction.
Posted by JoeyESQ at 2:29 AM

Email ThisBlogThis!Share to TwitterShare to FacebookShare to Pinterest
Labels: 80's Toys, Halloween, Joe Esq, Supernaturals, Taking It Back Way Back