So, The Walking Dead Season 2 Is Shaping Up Rather Nicely

The first photos of the zombies that are plaguing the gang in The Walking Dead season 2 have surfaced... and boy oh boy, these scary mofo's look wonderful!!! Despite rumors of all the writers being fired and massive budget cuts, it seems to be (from this one photo anyway!) that the show is right on track. 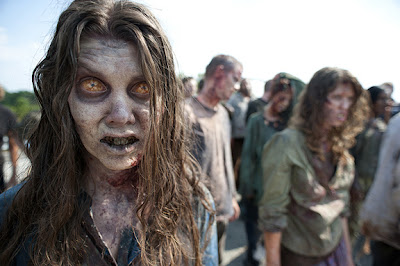 I didn't really understand why AMC would mess with the show period though... it doesn't make much sense, does it? This is a network with two of the highest regarded dramas that currently air on TV (Mad Men & Breaking Bad) and successfully cultivated another hit out of a zombie plague comic book series. These guys at AMC have been right time after time (except for Rubicon... I want the 10 hours I gave up to watch that piece of shit back!!!), so I would let them do WHATEVER they want with their shows. Lets just keep this one on the up and up, ok? Because The Walking Dead is one of the best shows on TV... period.
Posted by Mike D. at 11:06 AM