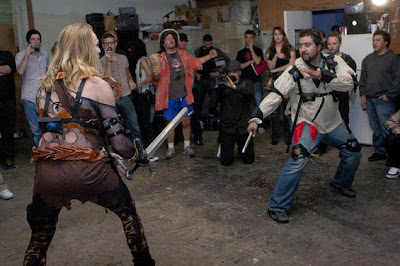 Check out this unbelievable new sport/competition that I can only hope becomes a national phenomenon... it's called the FWL, or Foam Weapons League for all you lames out there. This is for any of you people who ever whipped a fellow friend in the face with a pool noodle or all those guys who buy those awesome Nerf guns and shoot the shit out of each other (on a side note, my brother Anthony bought Mikey a Gatling Nerf gun for Christmas... 200 bullets at a time!!!). Imagine being able to re-create a Roman gladiator type environment with little to no risk of injury or death... I'm in!!! Their motto says it all - "Fake Blood... Real Fighting". Check out this cool video that gives you a peek into the wild world of FWL: 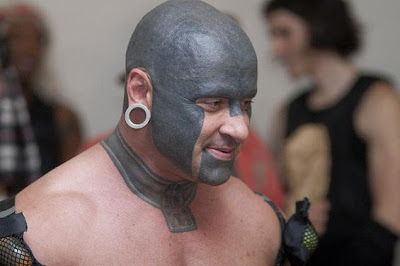 Holy. Fucking. Shit. They have a person named Donnybrook. That is sick. Now, all I'm saying is that with all of these dumb ass reality shows & other wastes of TV time get to air each week... so why not give this a shot? If I have to see one more group of ugly woman with money finding things to argue about or another cake/cupcake competition based show I'm going to get one of these fake foam Claymore swords and smack the shit out of a TV executive in the middle of their weekly board meeting. I am not saying that this would be a huge breakout hit (you never know, it might be)... but could it find a niche audience with geeks like me? Yup, that's a affirmative. You can check out the website for the FWL by clicking here and also friend them on Facebook. 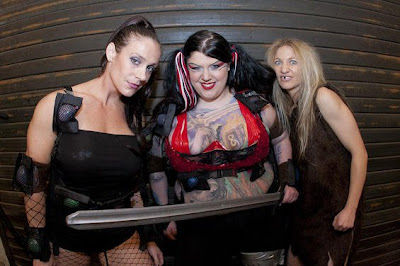