Here Is A Good Reason To Get The Starz Package On Cable.... Magic City 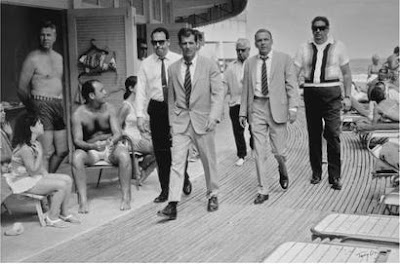 Starz has some great original programming that most people have never heard of. Party Down was an amazing show, Spartacus: Blood In The Sand was filled with sex & violence, and they have a King Arthur-esque show coming up featuring a ton of hot British actors & actresses... and now we get this:

As Frank Sinatra rings in a new year in the grand ballroom of Miami Beach's most luxurious dream palace – the Miramar Hotel – its visionary leader, Ike Evans, must deal with the Mob, his complicated family and a city in the midst of dramatic change as Fidel Castro takes control of Cuba, just 200 miles offshore. By day the hotel at the center of "Magic City" is all diving clown acts and cha-cha lessons by the pool, but at night Miami Beach reveals a darker truth. Dopers, dealers, strippers, gangsters and those who arrest them drift together to hear the top nightclub acts perform. Just beneath the surface, racial tensions stir. Ike must deal with all of this, even while global intrigue is brewing right under his roof. (via Variety)

A 1960's era gangster show entitled "Magic City" based in Miami about the day to day operations of a hotel on the strip??? Holy. Fucking. Shit. This has some amazing potential. I can see it now... a ton of real hstorical characters like Frank Sinatra & Marilyn Monroe passing through while we see the main characters deal with this wacky era... Politics, crime, hotels, celebrities... this show will have it all. I'm in. And just for the record, Starz programming is available through Netflix Streaming... so get on Party Down & Spartacus now!!!! Thanks to Warming Glow for being the best TV blog on the planet... now go get us some more info!!!!
Posted by Mike D. at 12:09 AM