I Wish I would Have Met Carrie Fisher When She Was Hardcore Boozing & Drugging... 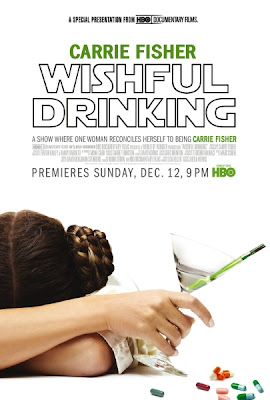 ... face it, Leia was a piece of ass back in the day. Fisher has a HBO special coming up on December 12th called Wiishful Drinking, and it looks magnificent. Its a combination of footage from her one woman show on Broadway & behind the scenes documentary footage discussing the highs and lows of Fisher's Hollywood career. She is sure to hit on the drugs, Star Wars, drugs, life as a star, drugs, George Lucas, drugs... well, you get the point, right? Lets just say the snow on Hoth wasn't the only white powder flying around the set of 'Empire Strikes Back'. Irvin Kirschner would drop dead if he knew the stuff Fisher was planning to talk about... oh wait, that happened already (What, too soon?). Anywho, set that Tivo or DVR up to make sure you catch Fisher's performance, because she is out of control and no holds barred. Plus, you gotta love the Star Wars font & Leia hairdoo that she sports in the poster above. Classic.

Here is the preview clip: