Man o man... on paper, the film version of Howard the Duck should have been a home run! A hit comic character that was HAND PICKED by lord commander George Lucas for adaption... effects by Industrial Lights and Magic, the best in the biz... a huge cast, featuring 80s stalwarts like Lea Thompson, Tim Robbins and Jeffrey Jones... I mean, how could this go wrong??? I don't exactly know, but it certainly did go wrong. VERY WRONG. Widely considered one of the worst films ever created and a box office flop, HTD was relegated to the designation of "misstep" by George Lucas and crew. But over time, a cult following around the film began to build. It found new life on cable throughout the 90s and 2000s, and nowadays is considered one of the biggest cult classics of the 80s!

So with the 30th Anniversary rolling around, we felt like we should try to host an event highlighting this fun film. So we teamed up with Den of Geek to do just that... on 8/26/16 we will invade Dromedary Bar in Brooklyn for a crazy event. And because its us, we decided to host a podcast talking about everything Howard: comics, movies and beyond! Join Jedi Rob, Mike D and Joey Armao as they chop it up in the CCD Nerd Cave discussing Mr. H to the D baby... 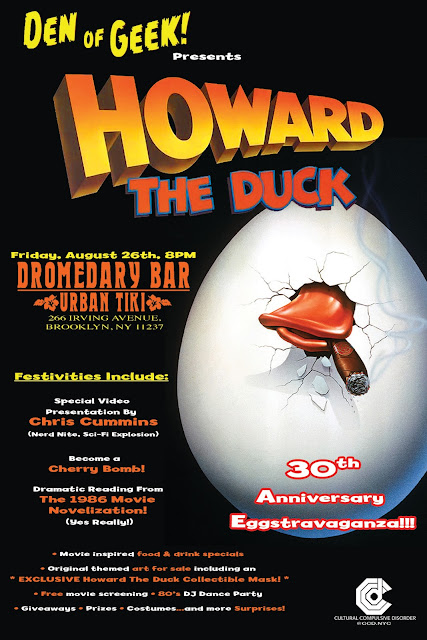