CCD Interviews: Live From The Show Floor Of The 2014 NY Comic Con - Ink Whiskey Steps Up It's Drinking Game... Literally!

In our quest to bring all of you guys who DIDN'T get the chance to come out to the 2014 NY Comic Con the best coverage possible, CCD has always looked for the best and most original booths on the floor to conduct interviews with. So when one encounters a 4 foot high Nintendo cartridge with a sticker for a game called "Drunk Hunt" on it... well, lets just say you got my attention! So after wandering over, I began to realize that those cartridges were not games at all... they were actually FLASKS, made out of replica Nintendo cartridges from the gang over at Ink Whiskey that feature fantastic original artwork for games like 'Legend of the Drink', 'Tetraquila', and 'Fine Ale Fantasy'... yup those names bring back some great memories, right? They even have a special edition 'Gold Plated' version of the 'Legend of the Drink' cartridge in honor of the O.G. Zelda game it is based on. Yup, these guys had one hell of an idea... and they are cool as shit to boot! Check out all their great products over at their webpage, and check out some pics of the cool ass cartridge flasks as well as the video interview we did with owner Matt live from the show floor... 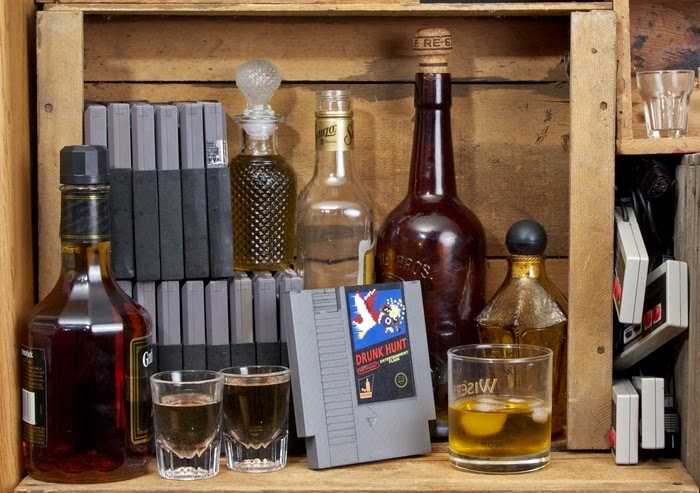