Tom Whalen Gets His 'Twilight Zone' On With His Year Long Subscription Based Poster Series From Dark Hall Mansion...

Tom Whalen is one of the greatest artists working in pop culture art right now. His work is often shown at Gallery 1988, Crazy 4 Cult, and many other shows and galleries around the country. If there is a big pop culture show, it usually features something from Whalen. I met him at Philly Comic Con a few years back, and the dude was super low key and cool despite being so well known in the geek poster community. So when I read that his next project would revolve around one of my favorite TV shows of all time and would take place over the course of the next year, my interests were immediately piqued. Whalen is teaming up with poster company Dark Hall Mansion to complete a subscription based series of posters based on classic Twilight Zone episodes. The series will run over the course of the next 12 months and will feature 10 posters. So a person pays for the full run up front, and then receives the newest entry to the collection via mail. The price seems high ($450 for the full 10 poster regular run or $650 for the 10 poster variant run), but when you consider that it works out to just around $45 - $65 a piece it is a bargain. The best part is that once you buy the run you are locked in... no need to try and snag EVERY release independently and end up missing out on one or two, therefore failing to complete the set. The episodes that will depicted are unknown, but Whalen is a great artistic talent and I am sure whichever ones he picks for the series will be executed to perfection. The posters are all 18 x 24, and will be set runs (230 sets of the regular posters, 70 of the variants) so don't sleep. The prints will be made available on Tuesday, August 19th at some time between 9:30 AM - 12:30 PM Pacific Time on the Dark Hall Mansion website. Which episodes do you hope Whalen takes on? These are going to be great.... check out the first sample poster (based on the classic episode 'Eye of the Beholder') after the jump... 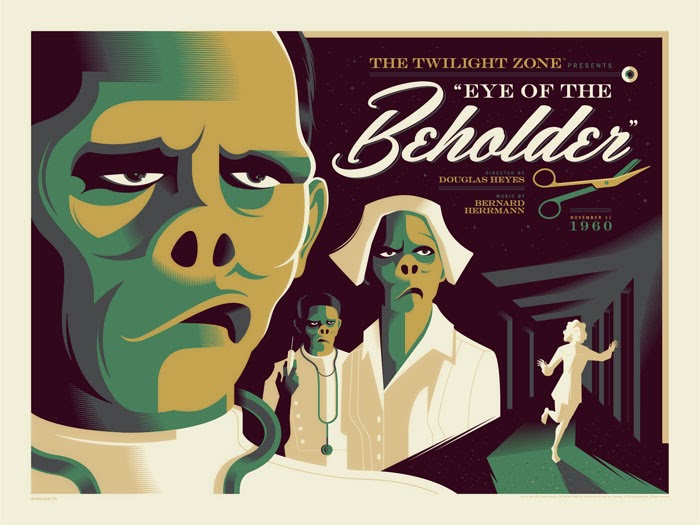 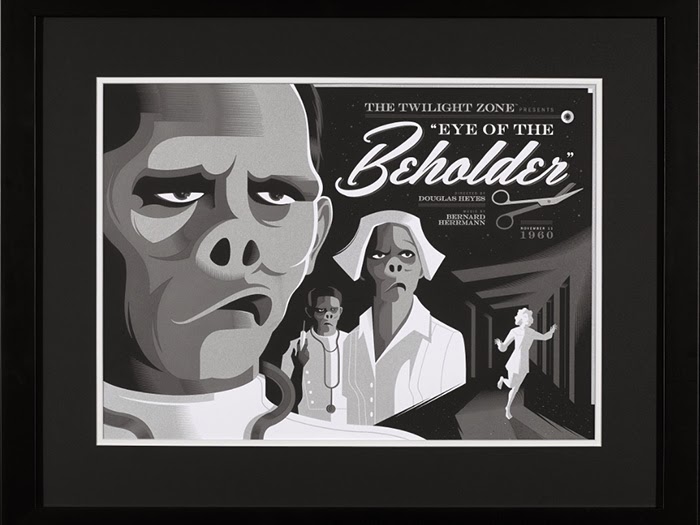