From The CCD Archives...Planet of the Apes Merch!!!!

I bet you thought we were all Aped out, well...not quite yet. I've been having some withdrawal pains since departing the simian world. We covered just about everything in our massive Podcast of the Apes and finally got to witness the 'Dawn.' BUT....I needed just a little bit more. So I have decided to dig through my personal archives and see what I could unearth.

Much thanks to my father, JediRob Sr.(hmmm, maybe more 00Rob), who deserves the credit for this treasure trove of geek artifacts. He was collecting and preserving geek memorabilia long before such a term was even commonly used, and certainly way before it was "cool." Taking his inspiration from Uncle Forry and Famous Monsters, he is an original fanboy and my inspiration.

So let's see what we got! These are all physical items in my possession...

See the full story after the jump...

The VHS collection from 1998. This was the 30th anniversary edition and was in nerd friendly widescreen. This set is where my Ape love really matured beyond just enjoying these monkey movies for fun, and fully appreciating them for what they were.

This is when they really started using the Statue of Liberty on all the print materials, much to the lament of Joe Milazzo on our podcast.


My 3 year old nephew Finn even caught glimpse of this picture and put it all together.

This VHS box set also included the excellent documentary "Behind the Planet of the Apes" originally produced by A&E. Hosted by Roddy McDowall this is the best Apes documentary I have ever come across.

Now taking it WAY back, here's a clipping from the New York Post February 8th 1968, the world premiere of the original film.  Both classic NYC theaters are long gone.

And a few more clippings showcasing ads from the original runs of some of the sequels.

This was one of many mock newspapers designed to promote the films.

The Planet of the Apes TV series hit the airwaves in 1974...

...and a set of trading cards followed.

Apes mania really took hold in the the mid to late 70's when they were regularly featured on TV. ABC's the 4:30 Movie, became synonymous with Apes over and over and over...

In August 1974 Marvel Comics debuted the first ever ongoing Planet of the Apes comic. Published in their magazine format, which was wildly popular and included brands like Dracula and Conan, this gave Apes fans a way in which to enjoy their love of the franchise beyond the theater. 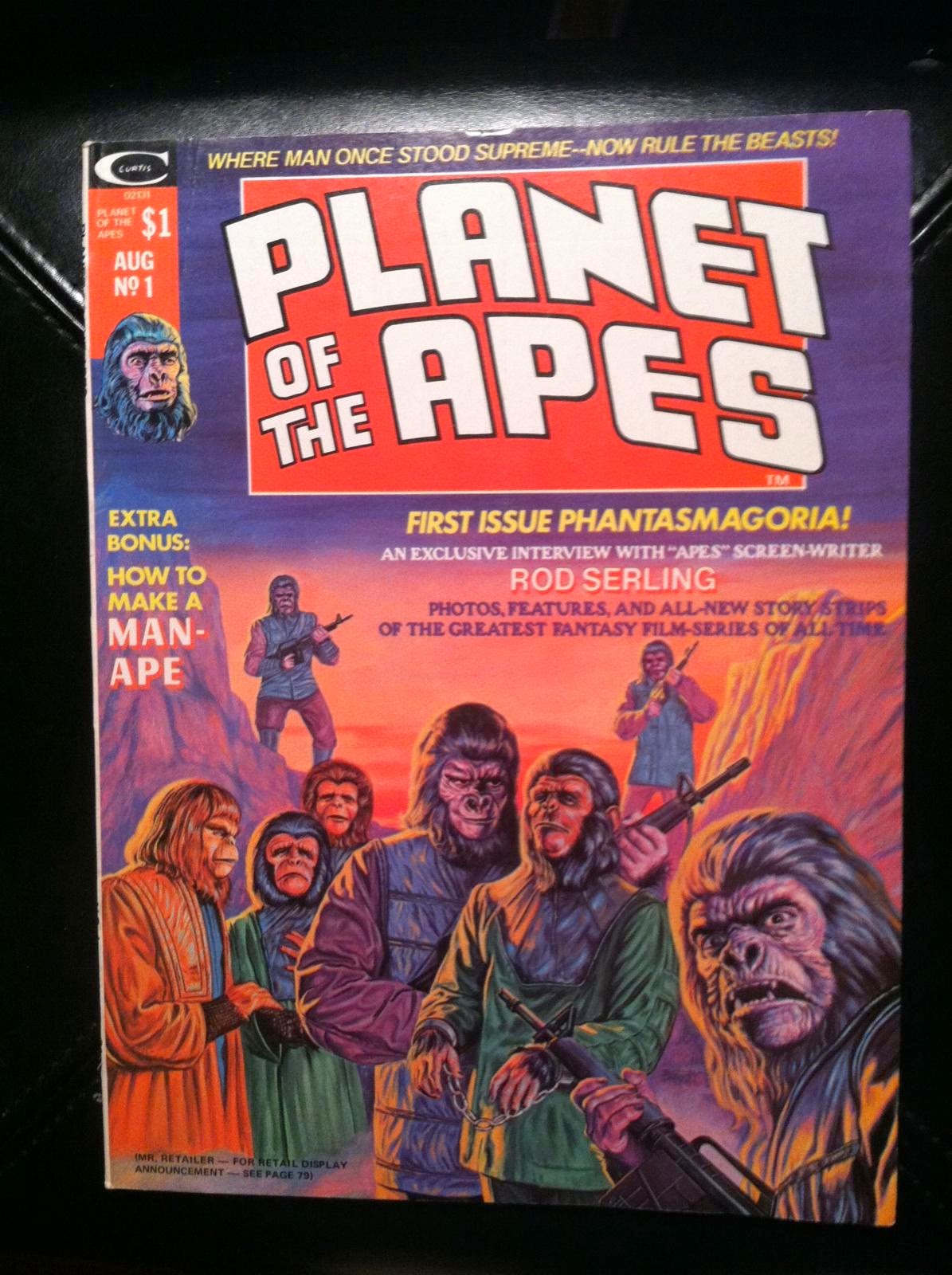 The magazine included adaptations of the movies as well as original stories which were the first to venture to other regions and cultures on the planet. These black and white stories are some of the coolest and stylistic in the entire Ape universe.

In October 1975, the movie adaption portions of the magazine were reprinted in color, in 'Adventures on the Planet of the Apes'.

We tend to think that movie merchandising is something of a new concept, but studios have been milking fans dry for as long as they could. Mail-away hobby kits were all the rage and the Apes films certainly got their due. The babies can fetch some decent prices on Ebay, unopened.

And finally, I currently posses all 7 films and both TV series from Planet of the Apes, on my phone in my hand. Anytime, anywhere I can Ape out! But during these early days of fandom, the home video market was a long way away. Even the VHS box set above would seem like sorcery. The only option you really had was Super 8 versions of your favorite movies. These were also advertised in magazines as a mail-away.

They would only run 10-15 minutes, and give you a cut down version of the film, but it was always surprising how well the movies still worked! I still have my hands on the reel from the original film...

While I can't take credit for this YouTube video, this is representative of what these short films were like. When you were at the mercy of network television, being able to jump down to the 'Planet of the Apes' any time you wanted was about as good as it could ever get...


While I do love my HD copies of Planet of the Apes on my giant TV, I would take a loud projector, a white bed sheet, and those 7 minutes any day of the week.

That's all for now, nerds. I'll keep digging, and who knows what else might turn up next time in The CCD Archives.
Posted by JediRob at 12:49 PM

Email ThisBlogThis!Share to TwitterShare to FacebookShare to Pinterest
Labels: From The CCD Archives, JediRob, Planet of the Apes