RIP Ultimate Warrior - Off To The Squared Circle In The Sky

As I said in my Wrestlemania review, coming out of this weekend, I was more excited to be a wrestling fan than I have been in a very long time. Unfortunately, that excitement has been tempered by the sad and untimely passing of the Ultimate Warrior this past Tuesday. If you were a wrestling fan in the late 80's and early 90's, then the Ultimate Warrior was part of your fandom, no question. Personally, I was a Randy Savage kid. In fact, my fandom of the big three went Savage, then Hogan, and then Warrior. But even with that said, Warrior's passing is definitely another little part of my childhood that’s now been snuffed out, and too early at that, because he was only 52 years old. He'd just mended his bridges with the WWE, was inducted into the Hall of Fame and was getting ready  to assume the role of some kind of goodwill ambassador with the company. And again, even though I was never the biggest Warrior fan, I was definitely looking forward to seeing what this would entail.
Continued after the jump!


Despite the fact that he was my #3 in the 80's triumvirate of wrestling icons, there's no arguing the impact the Ultimate Warrior had on the WWF in the late 80's. He may not have had the technique or skill of The Macho Man, or the monumental cultural influence of Hulk Hogan, but the Warrior brought an unrivaled intensity and unique charisma to his craft. His entrance was pure bombast. He was the only guy who would come flying down the aisle at 90 miles an hour as soon as his music hit. He would lap the ring a few times, then get in and shake the ropes like he was trying to break the ring apart. It was unique and electric and it definitely made the Warrior stand out from the crowd (so did the crazy face paint, neon tassels on his arms and his absolutely shredded physique). It didn't even really matter that he was absolutely sucking wind before the bell even rang most days, his matches usually weren't booked to go that long anyway! I'd almost go so far as to say Warrior gets a bad rap when it comes to his work rate in the ring. He was no Ric Flair by any stretch of the imagination, but the dude COULD work a match, especially when paired with an opponent with superior in-ring skills (more on that in a second), he just didn't need to. No one wanted to watch Warrior wrestle a mat classic. They wanted to see him bulldoze an opponent and press his vanquished foe over his head before sending him crashing down to the canvas again. Its part of what made the gimmick work so well. It's like he took Hogan's superhero shtick but dialed it up to 1000. 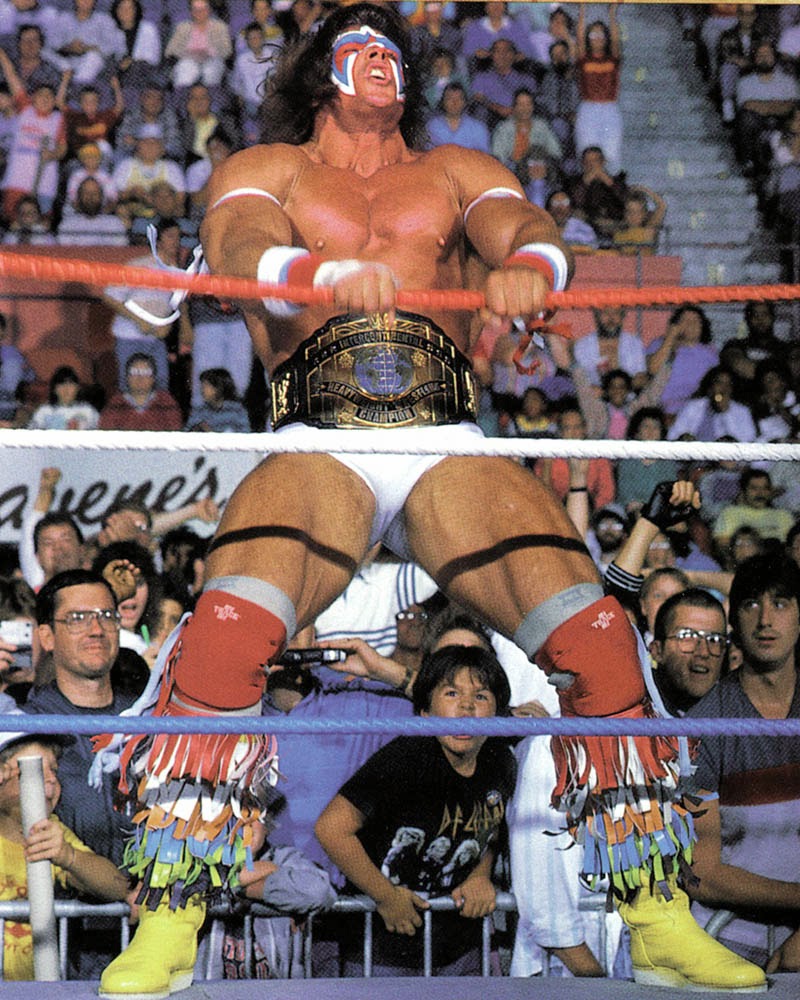 Wrestlemania VI is one of Warrior's shining moments, and I still remember where I was when it happened. The Ultimate Warrior, then the Intercontinental Champion was wrestling Hulk Hogan, the World Heavyweight Champion. This was unheard of . Babyface vs. Babyface. Hero vs. Hero. This was like Optimus Prime fighting Grimlock. Or Batman fighting Superman. It had never happened before, and it had the effect of immediately separating the Hogan marks from the Warrior marks. I think Warrior was probably the "cooler" choice, but I was cheering for Hogan, who was my hero as long as he wasn't fighting the Macho Man. The promos leading up to this match between the two were like a contest for who could spew the most overblown, hyperbolic nonsense. Meaning they were absolutely incredible. Warrior won that match at the Skydome in Toronto. He moved out from under Hulk Hogan's legdrop! You'd have thought something truly tragic had happened for 10 year old Joey because no one had ever done that before! Warrior then pinned Hogan to simultaneously hold both titles. That had never been done before either! This was nuts! 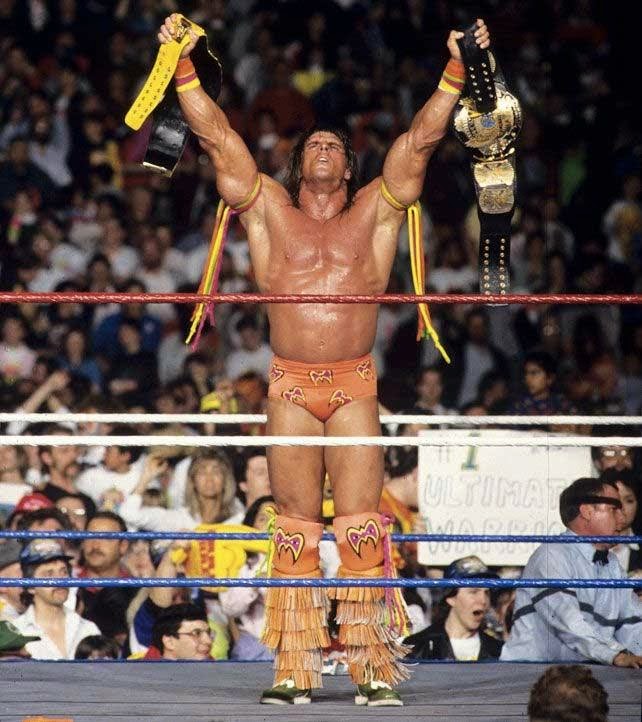 If Warrior's wrestling career ended right then and there, he would still have had a historic run. He went on to have memorable feuds with Andre the Giant, Ravishing Rick Rude, Jake the Snake, The Undertaker and Randy Savage, with some of those guys, Rude and Savage in particular, even able to carry him to some truly excellent matches. 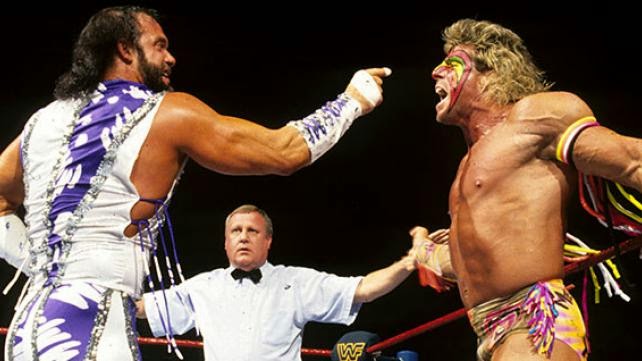 Disputes over money, backstage politics, and the Federal steroid investigation all contributed to the souring of Warrior's relationship with the WWF, and he eventually left the company in the early 90's. Stories came out about the guy being a major headcase, being difficult to work with, and also that he was a raving lunatic. The fact that he changed his name legally to Warrior in order to circumvent Vince McMahon's copyright on the name "Ultimate Warrior" does nothing to dispel these stories, especially not the last one. He would return to the WWF briefly in 1996 but be gone just as quickly, and then had a brief run in WCW, about which the less said, the better (actually if I'm being honest, I can't write about it because I didn't see any of it. I was always a WWE loyalist, and had no interest in watching Nitro at the time. I read about it all though, and it sounded awful). He also had a truly nonsensical, "epitome of everything wrong with the 90's comic book industry" comic book come out some time during this period. Thankfully, it only lasted 4 issues.

By the late 90's, Warrior had gotten a bad reputation. That was fueled in part by the WWE's "Self-Destruction of the Ultimate Warrior" DVD, (which was one hell of a hatchet job on the guy), and in part by the fact that in the years since his retirement he's said some things that some people found incredibly offensive (and I found, for the most part, incredibly hilarious, just for the sheer lunacy of it all). This led to me not really expecting much, or investing much emotion when it was announced that he'd returned to the fold and would (rightfully) be part of the Hall of Fame class of 2014. So I was really pleasantly surprised by his acceptance speech. He definitely humanized himself in my eyes. He has two sweet little girls and a beautiful wife, and when I heard he'd died my first thought was of them, because whatever you think about this guy as an outside observer, its tragic for kids that age to have to grow up without their father. As a wrestling fan,  I'm gratified that Warrior was able to come back to the WWE and be part of the family again before he passed. Whatever my opinion became of the guy after he left the ring, its the memories he created for 10 year old Joey that I like to remember. My thoughts are with his family in their grief, and I wish them strength and peace of mind in the days to come.
To close this out, I thought I'd share a few of my favorite Ultimate Warrior memories

This first one is my favorite Ultimate Warrior memory. Honky Tonk Man had used trickery, deception and other nefarious means to hang on to the Intercontinental Championship for 18 months. He was scheduled to face Brutus "The Barber" Beefcake at Summer Slam '88, but a boating accident put the Barber on the shelf. Honky had begun calling himself the greatest Intercontinental Champion of all time, and was becoming a real heat magnet because of that. So it was suitably epic when Honky got in the ring and wrote a check his body couldn't cash by demanding an opponent. Warrior hit the ring and the Garden came unglued. A few seconds later it was over and Ultimate Warrior was your new Intercontinental Champion. Truly epic!

This was Warriors half of the WrestleMania VI promos. Hoke Hogan never saw him coming!
And here's the finish of that match where Warrior beats Hogan. I can't emphasize enough how earth shattering this was for me. Hulk Hogan lost. This was like finding out there was no Santa Claus.
I wanted to post the Ultimate Warrior vs. Randy Savage retirement match in its entirety because that's definitely Warriors best work in the ring ever, but I can't find it on YouTube. So go get yourself the WWE Network and check it out. Its from WrestleMania 7. The ending is also one of Randy Savage's greatest moments, and possibly my favorite wrestling moment of all time, but I won't spoil it.
This one is some cheesy early 90's greatness. While feuding with the Undertaker, the Warrior sought the assistance of Jake the Snake in order to teach him to conquer the Undertaker's darkness... or something. Anyway, Jake turns heel on him here. Silly, but classic stuff.
And here's some even sillier stuff.. Also great, but for different reasons. Voodoo witch doctor Papa Shango put a curse on the Warrior. Enjoy.
And this is from Warriors WCW stint in 98 or 99. Again, the less said about this, the better.

And  finally, to help get that terrible taste out of your mouth, Here's The Ultimate Team (Ultimate Warrior, the Legion of Doom and Kerry Von Eric) vs. The Perfect Team (Mr. Perfect and Demolition) from Survivor Series 1990! Awesome.
Posted by JoeyESQ at 11:42 AM