I remember the time of year vividly. It was closing in on Spring of 1989.... I was just passed my 10th bday, and was still obsessing over my Christmas gifts. I was starting to drift away from toys (I remember getting my last toy gifts being of the TMNT and Batman the Movie variety) and more towards video games totally. Sega Genesis was on the horizon, and Nintendo was at its peak stride. There were so many games... and all were better than the other. Improvements were coming rapidly, and I remember vividly wearing out my NES Max & NES Advantage controllers playing for hours on end. But that was when the video game market was about to get turned on its ear. Commercials started to fill the Saturday morning airwaves for a new video game system.... not another console system, but something quite different. A hand-held game system that promised 8 bit graphics (the same as your home NES system) and a way to play a friend head to head on your own separate systems. It was to be called GameBoy... and I wanted one terribly.

Read more after the jump: 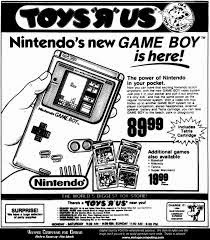 The rumors began flying around about it being released in Japan (this was before a time with Google, so we used to revel in stories about Super Famicon and things like that from the video game mecca of Japan that were passed around word of mouth) and that it would be out that summer here in the US. I remember wanting one terribly bad... but I knew I wouldn't be getting one for quite a while. You see, my birthday is in January... on the 5th, just 10 days after Christmas. So I tend to have really great gift getting months in Dec & Jan and then don't get shit for another 11 months... and this was killer as a kid. Having to wait all that time for gifts stunk, and it was made worse by my older sister Oona having an August bday. She had something to look forward to twice a year spaced out with her bday and Christmas... and it stunk for me who got both at once. But that year my sister was turning 15 and wanted a big party in our yard with her High School friends. Plus she asked for bigger gifts. My dad felt bad at all the attention and fanfare my sis was getting, so he went out and bought me the GameBoy I longed for. I was so shocked.... but it was kind of bittersweet. It came with Tetris, which was cool. But I didn't get any other games... and I wouldn't until Christmas of 1989, six months later!

The reason I bring this trip down memory lane up is because April 21st marks the 25th anniversary of the release of GameBoy in Japan. It ushered in an era of personal gaming that forwarded the industry in many different ways. I never really fell in love with my GameBoy... I think it was because I loved my home systems of NES & Genesis better. But I did eventually love my Sega Game Gear, which was the evolution of GameBoy's personal gaming technology. But looking back, you gotta give props to the innovations that allow for changes to come. Big shout out to my buddy Rob Martin for posting this original GameBoy commercial over on Facebook. It is funny to take a look back at something so innovative. Thanks for the memories...