So... it's finally over. Now that the Academy Awards have taken place, people can shift their bitching and moaning from who was nominated & who was snubbed to who won and who got the shaft. The Oscars always are divisive and cause arguments among film fans, but that is why they are so epic. I remember getting the pull outs of the nominees the day of the awards out of the Sunday paper as a kid and filling out my bracket, and often remember my parents and grandparents helping me to see all the films that were nominated. It holds a special place in my heart, so watching the show now if more of a "must do" behavior as opposed to "want to" behavior. I have to watch the show. That about sums it up. But there were some moments that were just perfect... basically the things you have come to know and love from the show. There were also a few things I hated. Not many, but a few. So here it goes... my 2014 Oscar recap rant, in all its snark and splendor. Hope you enjoy it... 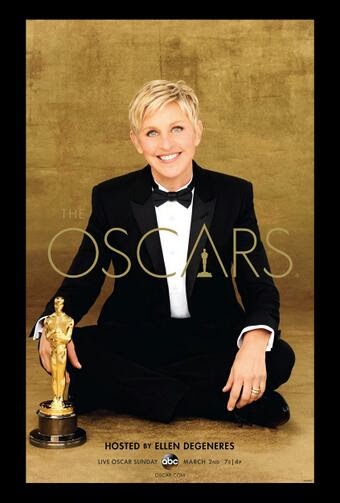 And these are in no particular order... except for the last one! 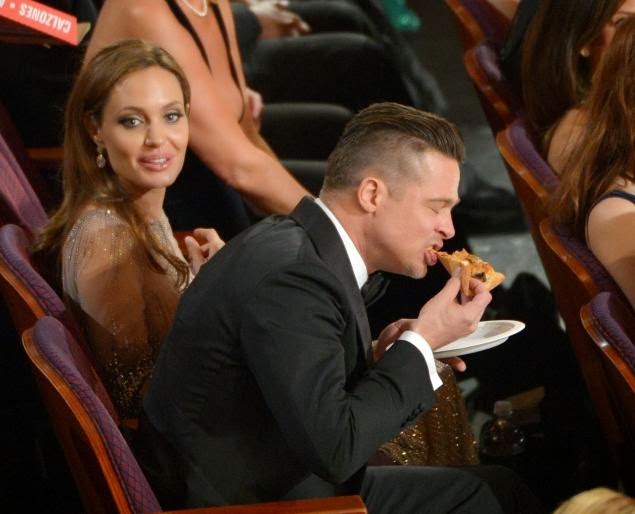 1) Ellen was a great host. Very funny in her own way, and her shtick and gags worked well... especially the pizza & selfie one. She is the kind of host (both here and on her show) that takes down these celebs a peg and treats them like just a few other folks... and that makes them seem more accessible and regular to us. Her quips with Meryl Streep, her funny abuse of Brad Pitt, her referring to Marin Scorsese as Marty, and her calling out the mad king Harvey Weinstein himself... TWICE... are just a few examples of her killing it. And I love that she didn't compromise her self style and lifestyle as a gay woman by feeling the need to put on a dress. She rocks them suits so well... and made the whole hosting thing look easy! 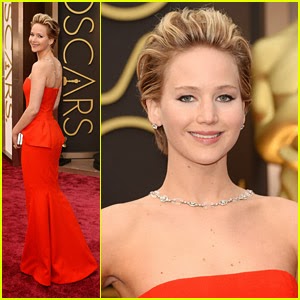 2) Jennifer Lawrence is beautiful, but also seems to be having the time of her life. She is always smiling and genuinely looks totally unimpressed by all that is going on around her... she is honestly living her dream and you can see it in her fresh face. She is also the most candid and off the cuff funny actress out there right now. She waved off Pharrell when he was getting the celebs in the front row to dance because she knew she would probably crack up and fall, her faces when Ellen was giving her shot about falling last year, and her constant quips back and forth with her boyfriend Nick Holt (The Beast!) and her two time co star Bradley Cooper (they have some serious chemistry together) all night are just a few examples of her flippant confidence and why I (and so many others) love her so much. 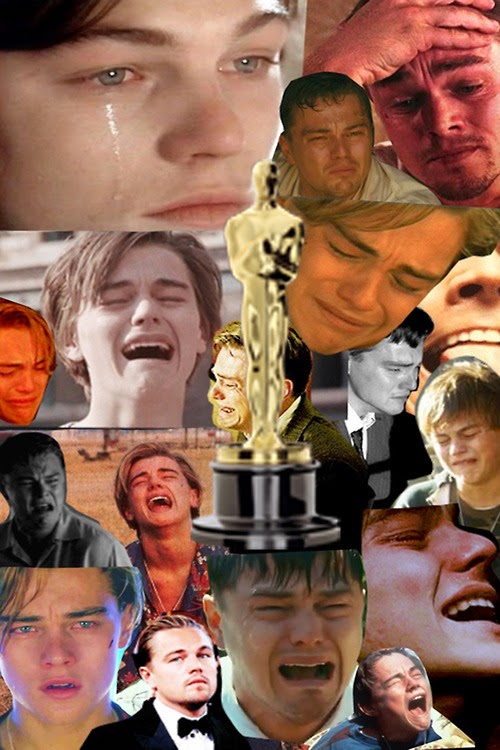 3) Glad that there were some shocks. Leo was great, but to give it to Matthew Mac was a really big coup. Same for that Lupita chick... despite the fact she won a bunch of recent awards in the category I really didn't think she had a shot against a twosome like Jennifer Lawrence and Julia Roberts. Listen, I know Matthew McConaughey and all the other nominees all gave award winning performances. They are arguably the 5 best acting performances in that particular category, so no winner is a complete shock. But I really did think Leo would win it, considering how great he was and how popular the film was. But good for them, and all the winners! Mac is having one hell of a year... you came a long way from the Rom Com factory Matty! 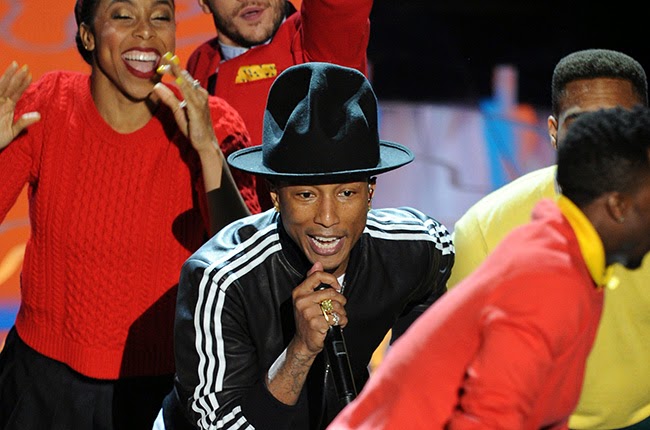 4) Pharrel is super talented, but enough with that f'n hat already. C'mon man. We get it. You own that dumb hat in a variety of colors and are not afraid to break it out for EVERY public appearance you make. Please leave it home from now on. It is fucking retarded to look at... and he even animated it for his background Happy face screen saver. Ellen even used it as a physical prop in her money collecting joke. Please... you are a trendsetter, so please set another trend! 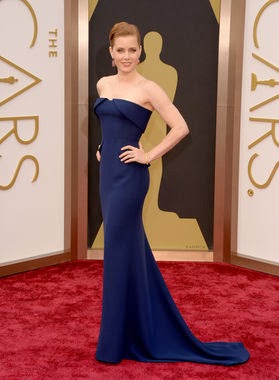 5) Amy Adams is very attractive to me, mostly because she looks and acts so normal. She doesn't "look" or "act" like the huge star she is, and that is cool. And her sexiness is just so flawless. Look at her hair. Always in the exact place it should be, never a strand out of whack. And her clothes fit perfect, even though she may not have the sexiest body of all the starlets. She is an every woman, but that makes her able to play and be believable in just about any role. She reminds me of a certain Mrs. Meryl Streep when she was Adams age. I suspect she will have the same type of career (maybe not 18 nominations successful, but epic nonetheless) 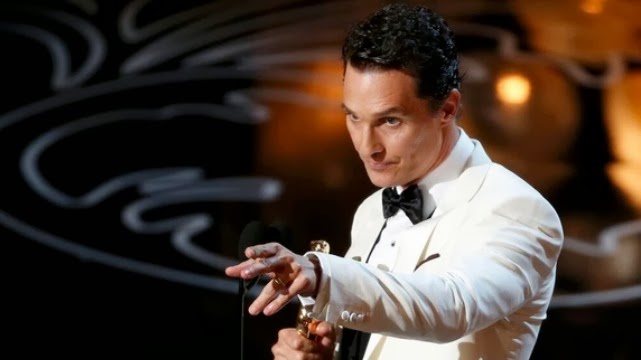 6) The acceptance speeches are always cool to me, but this years were great. This is when a person is at an absolute high point in their lives and then they are give a quick 1 and a 1/2 minute chance to speak on it, you are gonna get a bit of insight into that person. This year Matthew McConaughey joined the pantheon of all time great speeches. He killed. He was poignant, funny and introspective... never coming off douchey, yet finding time to honor God, his parents, his family and even work in a little one liner from his role in Wolf of Wall Street. Cool beans brother. I also really liked the dudes from Gravity. Good thing too, since they won so many awards! All that Spanglish talk was hysterical, especially when Cuaron called the people from Warners Brothers "wise guys" and then corrected himself by saying "wise people". Very funny stuff. 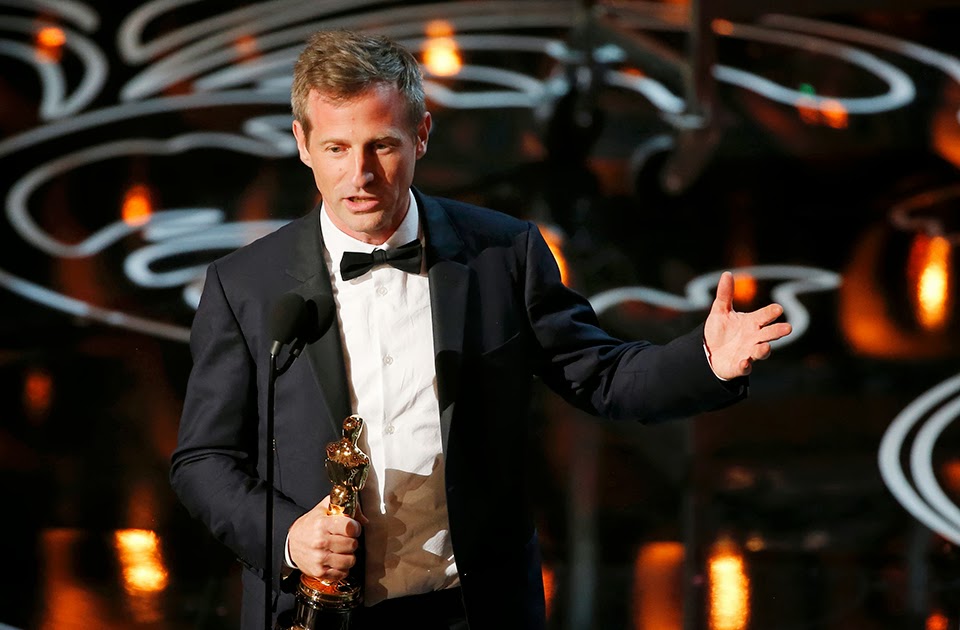 7) Even though 'Her' didn't win any of the major acting awards, winning for best screenplay must be really satisfying for Spike Jonez. He is an epic writer, so it is great to see his weird niche crack the big time. I always loved everything Spike did, and he seems to be one of those easy to please dudes that just wants to knock out cool stuff that he wants to get to the world. His movie making, writing and other projects are fun for him... they are labors of love. And it is apparent every time you see him smiling away, bopping around all happy go lucky. Glad to see what seems like a good dude get his due. Can't wait to see that movie ( I haven't seen it yet... sue me!) 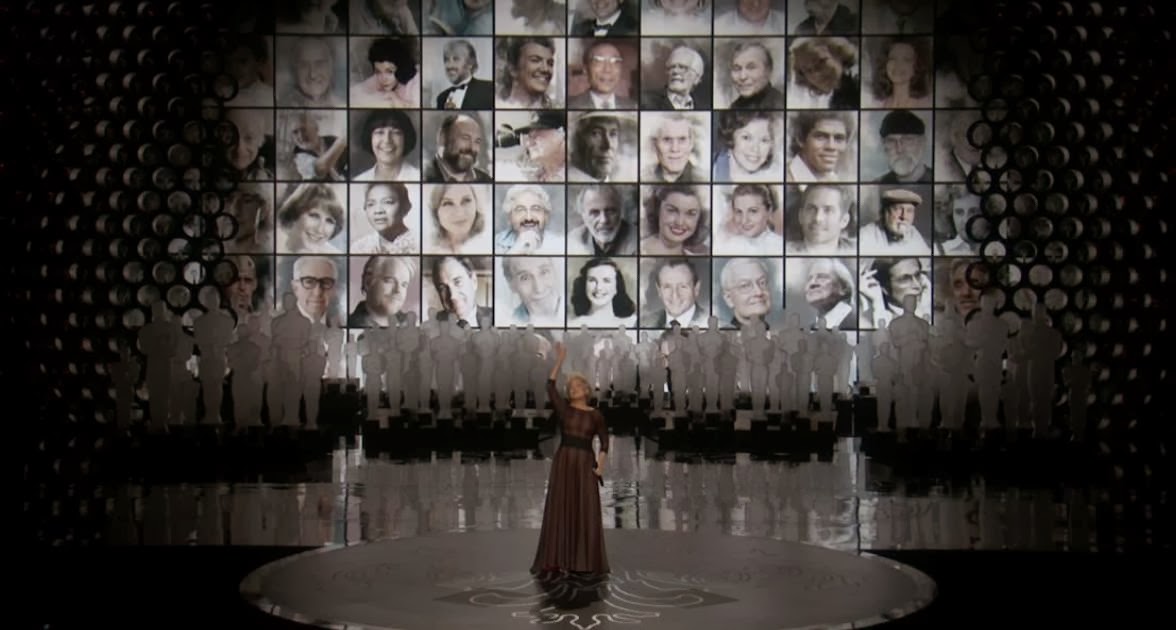 8) The RIP clip was crazy good, and very touching. It hurt me as it does every year, since I love movies so much. Damn, it sucks to lose people... especially losing people that make movies, which I love so much. The big names don't shock anyone, because they are fresh in your heads. But its the ones who died early last year or the people behind the scenes that you don't really know by name (but love their work) really are tough to swallow. Starting with Tony Soprano and ending with Phillip Seymour Hoffman was a nice touch... and then having Bette Midler sing Wind Beneath My Wings was a nice touch. Nicely done. 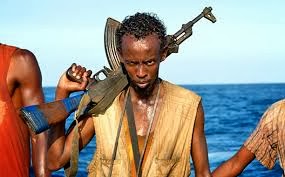 9) That Somalian dude from Captain Phillips is a real dude, and looks like that in real life. Actually, the dude is even skinnier! The camera really does add 10 pounds... bringing his weight up to a robust 73 lbs.!!! At least on film. That is crazy... I thought it was movie magic, but that dude really looks like that... now that is insane. What is also fantastic is seeing a dude like him at the Oscars. Two years ago my man was probably toiling in obscurity back in Africa, and this dude is now thrust into the middle of the Hollywood free-for-all that is the Oscar experience. That must be surreal. Good for that dude... and good luck on his next role as Zombie #5 in season 5 of The Walking Dead. He is a steal since he don't really need any CGI or make-up to pull of the dead corpse look!!! 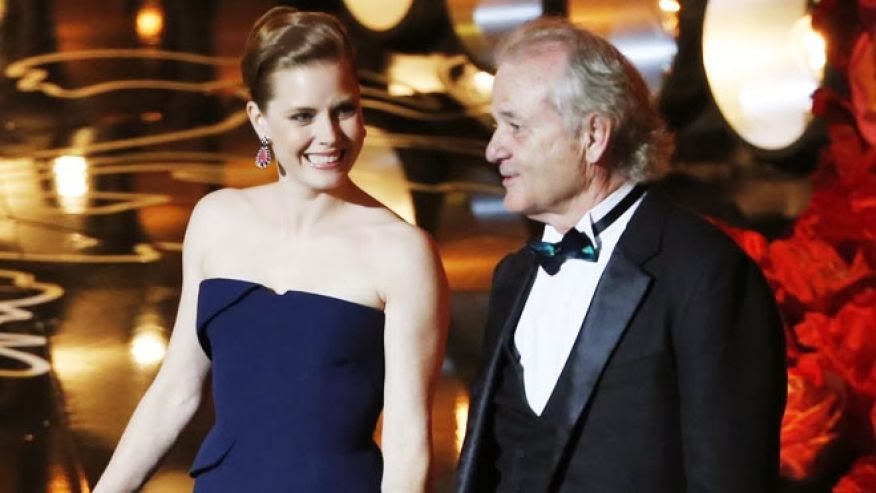 Bill Murray giving Harold Ramis a shout out during the Best Cinematography category. Class act, well done. His hand was shaking after he did it as he tried to keep his emotions in check. Even funny guys get emotional.... and it was nice to see Murray showing that emotion, especially after he made his short and sweet public response to Ramis's death a bit easier to forgive. They were great collaborators, and no matter what happened between them over the years you can see how much losing him meant to Murray. Very touching.

And now for my three least favorite moments:

1) What the fuck John Travolta? What the absolute FUCK ?!? First you show up with a dead raccoon glued to your head, then you deliver a perfectly good monologue introducing Idina Mendzel... and the you absolutely BUTCHER her name ! How? WTF ??? Come on Vince Vega... you are better than that! 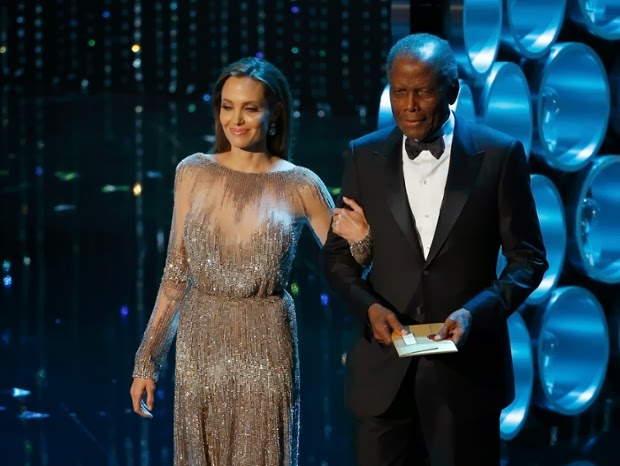 2) I love everything Sidney Pointier has done in film and for the furthering of African Americans in the movie and music industry, but i absolutely hated to see him up there looking like one of Michonne's pet zombies. He was stumbling over all his words, his eyes were all sunken in and big, and he looked helpless. I don't want to see one of my heroes like that. I'm glad he was there, and glad he is still alive. But don't put my dude on that type of stage and make him look stupid. 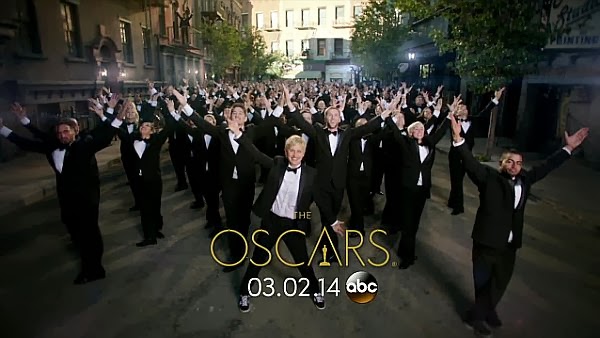 3) No music number for Ellen? That stinks. She is really talented. She could have killed a musical number. Billy Crystal did them great, and I kind of thought we would get that from Ellen. It would have been fun to see. Ellen was great, but one of the running jokes on her show is the fact that she loves music and dances on the show in her own funky style ALL THE TIME! How can you not do a number on this big a stage? C'mon MAN!

Pretty cool show. No matter how pretentious the awards may be, the show will always be an important part of my year! Thanks for all the distractions....
Posted by Mike D. at 2:47 PM