I have had my eye on the production of Dario Argento's newest film 'Dracula 3-D' right here on this blog since way back in July 2011 when the first images from the production popped up on the web. At the time I was a bit intrigued, mostly because Argento is one of my favorite horror directors and I was dying to see him have another good movie under his belt. I also love Argento's 'stalker' cam that he uses with his killers, putting the audience into the frame of view of the killer. What better character than Dracula to use the 'stalker' cam with? But now its two years later, the film is in the can, and it is about to be released... so what do we think? Well... the trailer poses an interesting conundrum. One way to look at it is that Argento is going for the "classic Hammer Horror" look and feel of the great European horror movies of the 60s & 70s. This is quite easy to imagine and understanding considering Argento has roots in this era of film making and probably wishes it was all as simple as it was back then. Or.... it could be that the movie just sucks ball sacks and looks like a 30 year old piece of shit. Who knows? The movie comes out on Oct. 4th, and I really don't care what critics say... I for one will give it a shot. Argento earned my viewership with Suspiria. But if it doesn't play like a Hammer film, a vintage love story, and just sucks... well, at least we will get to see a ton of tits. Like Asia Argento, Dario's daughter, tits. Big D loves showing off the tits, especially his daughters. Check out the full trailer and one of the posters (which has a certain Hammer feel, no) after the jump... 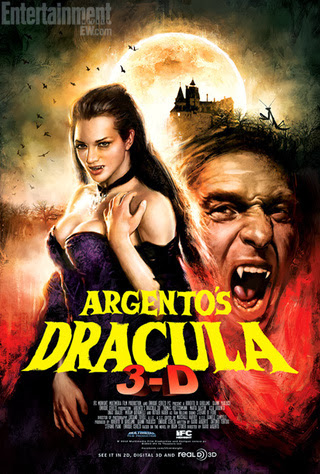