I have loved movies for as long as I can remember. My dad made sure to share tons of films with me as a kid... no genre was safe, and he made sure to mix in early 80s contemporary movies like Q the Winged Serpent and Friday the 13th as well as classics like the Pink Panther films and anything with Audrey Hepburn. I have a ton of great film memories from when I was a kid... but one of my earliest memories was watching At The Movies with Gene Siskel and Roger Ebert.

Please read more of this story after the jump... 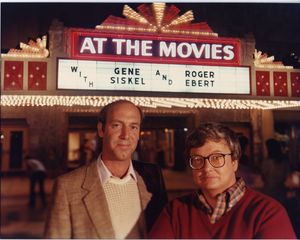 The weekly movie review show was must see TV, and the infamous 'Thumbs Up, Thumbs Down' rating system was simple and effective. When Siskel died back in 1999 he was replaced by Richard Roeper, and the show remained important... and the reason was Roger Ebert. He was the driving force, the reason why people turned in, and the voice that many generations of film fans turned to when they wanted an opinion on film. While I certainly didn't always agree with his choices (he hated the whole horror genre and often poo pooed genre films like comic book movies and action films), I always liked that whenever he expressed an opinion he was concise with a WHY he felt a certain way. it was never just a blanket "I hate this...". Nope, he always explained why he hated it... and often provided you with alternatives that he felt got the job done better. if he didn't like something he told you, but the also gave you a few things to seek out to see how much better it could be. I am definitely going to miss him.

One of the great parts of the Internet is the vast wealth of information that exists out there. Thanks to the Chicago Sun Times, Ebert leaves behind a huge plethora of his reviews over at his website, which can be accessed by clicking here. It seems that the last posted review he has on the site is for Stephanie Meyer's 'The Host', which he gave 2.5 stars. Get over there and check out all the great work he has done. The man is a cultural icon and should be revered. Rest In Peace Roger... thanks for all the tips and help with the movies I love so much!!!!
Posted by Mike D. at 9:59 AM