Michael Jordan is one of the greatest basketball players of all time. That is not a question. Before Lebron James, he was by far the greatest I have ever seen in my life. But MJ is much more than a basketball player. The dud helped usher in the new era of the NBA back in the mid 80s, and he helped change the status quo of what was accepted in terms of play and style. MJ had so much swag. The gold chain he rocked during the dunk contest? Gangster. The crazy colorways of his kicks, the baggy shorts and slouched socks? Signature MJ. Taking his shoe line to dizzying heights, and becoming the quintessential spokesperson for a plethora of companies (Mickey D's, Gatorade, Hanes, etc)? Getting money from all angles. And the 6 rings that he won for the Chicago Bulls? Proof ON THE COURT that the boy could ball. The dunks were gravity defying, the storylines (flu game vs Utah, getting Isiah banned from The Dream Team, etc) were legendary, and the sneakers .. oh my god the sneakers!!!! The sneakers may be the biggest contribution that MJ has had on my life, cause I have had at least 1 pair of each of the 20+ yearly editions that Nike has been putting out since MJs rookie year. I always wanted to hate MJ for what he continued to do to my hometown NY Knicks, but I couldn't because he was just too much fun to watch. Happy bday Mike... Check out some tribute videos after the jump.... 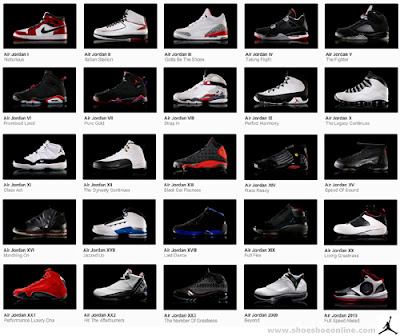