"Spring Breakers' Still Looks Like A Movie About Sluttie 19 Year Old Girls... And I Still Can't Wait To See It!!!!

I have been eagerly anticipating the release of Harmony Korine's  film 'Spring Breakers' for quite awhile, since last May to be more precise (click here for CCD's 1st look). One reason has to do with the extremely large cast of bikini clad in their early 20's starlets that are starring in the films (click here to see the films Tumblr). Some of those young beauties include Vanessa Hudgens, Selena Gomez, Ashley Benson, and even Harmony's daughter Rachel rocking small bathing suits and cool sneakers. Or it could be the ridiculous looking character that James Franco is scheduled to play. I know Franco has range.. but a corn-rowed, gun toting, tattooed gangster rapper? Yup, that is going to be awesome. Now the film is right around the corner (it has a March 2013 release slated), and we are starting to get even cooler one sheet teaser posters that will probably be displayed in the lobbies of movie theaters nationwide. I think this one is of Ashley Benson... I can't really tell, because of the unicorn adorned ski mask (I can't believe I just typed that). But with all the bright colors, intriguing characters, gunplay and sexy jail bait starring in this thing I for one will be first in line to see this. It opens in LA & NY on March 22nd, and then wide after that. enjoy the new posters after the jump... 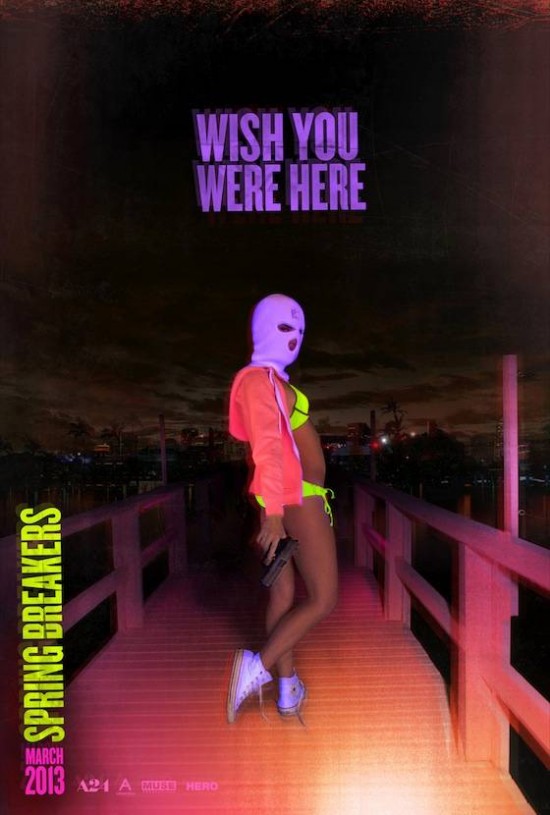 Here is a bit of a bonus video for you guys: