Revenge of the Red Shirts

I came across this awesome photo over at Dorkly .com and wanted to try and suss out more of a backstory by going to the original page where it was posted, but I have spent the last 45 minutes surfing over at the DrediKnight's webpage and found no site of it amidst the reggae and snowboarding pics that dot the page. But even though I couldn't get a backstory on this awesome photo, it doesn't take much information to know that this may be one of the greatest examples of group cosplay in the history of conventions. the Red Shirts are the poor souls who are members of Star Fleet and are usually the ones who die on Star Trek. They are the expendable henchmen that keep the crew in working order for the writers who have to kill someone, and can't exactly kill of Captain Kirk or Spock. JJ Abrams also gave them a nod in his film when all the cadets (including a young Kirk & Spock) wore Red Shirts while they were at Star Fleet Academy. But where do all those dead Red Shirts go... or better yet, where do they go once they have risen from the dead??? Comic Con of course!!!! Check out this dope photo after the jump... 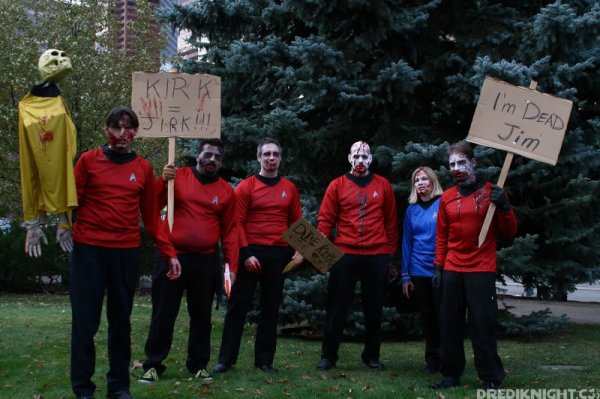