The heat surrounding the controversial film “Django Unchained” just got turned up another notch or two following the release of action figures based on African American characters from the movie.

The movie, which is set in the years just prior to the Civil War, follows the story of a freed slave who enlists the help of a German man to free his wife from her evil owner in Mississippi.

According to reports, Critics of the film, which was both written and directed by decorated director Quentin Tarantino, originally blasted it for its use of the “N word” when referring to the African Americans in the movie.

Now, however, the 8 inch tall dolls depicting Django, the protagonist in the movie, his wife and the German bounty hunter have taken center stage and production of the figures was stopped on Jan. 18.
The central reason why the dolls were put on the shelf was that they were considered offensive to African Americans.

The president of the National Action Network said the doll was offensive to the ancestors of today’s African Americans as well as the entire black community since they are geared toward children and could be used for entertainment and “making a mockery” of slavery. 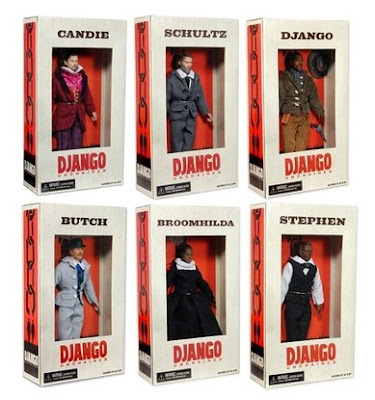 As someone whose ancestors were not brought to this continent in bondage, I may not be the one to comment on the wisdom of producing a line of dolls based on the motion picture, Django Unchained, one of my favorite movies of 2012. I was looking forward to adding these to my collection because they look to be of high quality and design. I wanted a nice Mego-sized cowboy in my collection.

NECA is a company that does good work, especially with the photo-realistic representation of it's movie characters. The sets which have been completed will instantly become highly sought after collectibles but will be priced out of my reach. Maybe one day I will find a Django and Shultz in box for a steal.

I would like to see similar protests against the marketing of images of rappers or killers from the movies which also happen to be played by black actors. It seems that Django gets targeted because Tarantino is a white director and the movie is so high profile, giving those who need an issue an issue to rile up their base. It's not like they are producing a plantation playset with whip wielding overseer but a film company like the Weinstein Company has to be sensitive to each demographic in it's audience.

But to be truthful the 'slave' is the hero of this picture. Anyone one who had seen the film would hardly say it's painting the whole institution of slavery in a positive light. If anything, it's makes the whole institution and the white masters to be buffoons and targets for ridicule. I found the whole exercise refreshing to be honest.

What do you think?