A Wish For Wings That Work

Made in 1991 and starring the characters from Berkley Breathed popular newspaper comic strip, Bloom County, A Wish For Wings That Work is the greatest animated Christmas special you have NEVER seen. It's my holiday gift to you.

It's superior to anything you have watched a billion times before (especially that retched Frosty the Snowman) and your kids will adore the characters and it's message about being happy for who and what you are. Some of the content may be seen as adult but it so far over their heads that they will never catch on. They will be too busy being impressed with the gorgeous animation and frantic action. 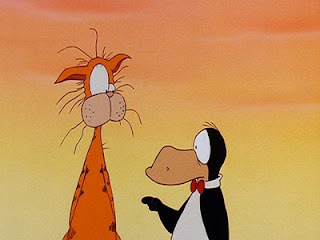 Staring Opus the Penguin and the mentally damaged Bill the Cat this holiday cartoon is the most heartwarming thing I can stand at this time of year. It's a true fable for the ages and you NEVER see it on TV. I hope there is a copyright reason and not some dickhead reason though I understand from my research that Breathed was not happy with the final product. As a long time fan of his newspaper strip, I was charmed by it and thought it got the characters right - or as I had imagined they would look and sound as I read the comic strip.

Some people may think that a Christmas special that shows a stoned cat is hardly in the spirit of the season. Then think of Bill as a retard then if that helps your sensitivities instead of the drug prevention poster he has always been.

That therapy session is off the hook and only funny to adults but it has the same subversive heart and soul that the newspaper strip always did. The Kiwi looks about ready to put a gun to his head. He is getting NOTHING out of group therapy.

The dream sequence is especially creative.

The music and vocal work are all top notch and the animation is zippy and bright. The whole world just looks soft and safe. This is one that kids will watch over and over again because it's goofy and heartfelt.

How great is that ending? Santa said the most by saying nothing at all...AND IN VERSE! Who knew the old marketing tool had it in him to surprise me all over again?

Breathed's complete disowned it due to a variety of reasons. Despite that, it is a really charming little special, which will mean more to you if you are a Bloom County fan, but is enjoyable even if you're not.

Lisa Horowitz of Variety gave the special a positive review, saying that it "crams a lot of action and intelligence into its half-hour". She also praised the animation and vocal performances.

Breathed, who was credited as the writer and executive producer of the special, was disappointed with the overall results. His displeasure with the special was shown in a 2003 Washington Post interview where someone asked where a copy of the special can be found on VHS or DVD. Breathed's response was:

Hopefully in the rubbish pail. We can do better than that and we will with an eventual Opus film... but I'm glad you enjoyed it. I presume your family was on speed when they watched it. I would imagine it helps.

In a later 2007 interview, Breathed claims that the reason he dislikes the special was simply "unspectacular ratings" and his humor "wasn't meant for television, even if it was done right." Another reason was his "lack of writing experience" and the director was way over his head. He stated that he wanted Sterling Holloway to provide the voice for Opus. 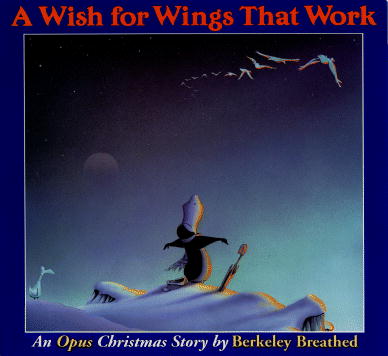