The 2012 NY Comic Con is in the books, and I have come across some interesting tidbits to what is going on in the comic world. There are some great stories that I can't turn into features, so I will just share them with you here in this link column. Yup, I am to good to you guys. Enjoy the links after the jump....

1) When one thinks comics, one must think Jack Kirby. The guy is single handily responsible for co-creating the Marvel Universe alongside Stan Lee & Steve Ditko. But I had no idea he was also part of the massive Argo cover up that is the basis for the new Ben Affleck directed movie. Check out this awesome article about Kiry's involvement from the Comics Alliance that I got from my boy James West. Awesome stuff... and real life!!!

2) The ultra cool website Geeks Are Sexy has a great article about Mandy Caruso, a female Cosplayer who is quite gorgeous and sports elaborate costumes (I believe she made our Day In Pictures posts) to the 2012 NY Comic Con and fought back when she was degregated by some overweight fanboy with a web show. Mandy abused his life on camera and is getting much love on the Net for sticking up for female cosplayers... you go girl!!!! Mandy's Tumblr can be found here... 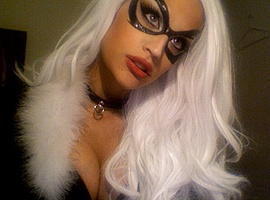 3) Very cool video behind the scenes of the 2012 NY Comic Con with the man himself, Stan Lee, by Mashable Video. The interviewer asks some interesting questions about Lee's feelings toward Cosplay and the popularity of comics in general. Great stuff....

4) Curicon is Ebay for geeks. How great is this. Comic Books. Action figures. Old video game systems. You collect it, you can sell it. It is For Geeks, by Geeks. Gotta love the idea, lets hope it catches on. It already has over 1,000 items listed for sale. Go buy something!!!

5) Darkstalkers is coming back!!!! Well, sort of. Capcom just announced Darkstalkers: Resurrection at the 2012 NY Comic Con, which is a mashup of Darkstalkers 3 & Darkstalkers Revenge. These games were awesome and now you can play all of the great characters with this downloadable game. Hopefully this is the first step towards Darkstalkers 4!!!!!!!!!