Whats going on around the Web you ask? No need to try and see everything... we can point you in the direction of 5 pretty amazing stories to help you pass some time. Obscure facts about The Princess Bride? Check. Huge boobs and hot nerd chicks on Tumblr courtesy of Cal? Check. Thirty movies to look forward to this Fall? Check. Promethesu Blu Ray features announced. Yup, that's here too. And a custom Star wars motorcycle to make you drool. Get in there people... your Links await after the jump....

1) Five Things you probably did not know about The Princess Bride, one of my favorite movies ever (and THE FAVORITE movie of my lovely sister in law Kate) on the 25th anniversary of the film. Interesting facts... and some great side bar type stories.

2) This was certainly a great summer for movies (Avengers & The Dark Knight Returns were top of the pops), but this Fall the movie studios are bringing the funk!!!! Screen Invasion lists the 30 most anticipated movies of the Fall, and I have to say that I am looking forward to at least 26 of them... which is more than I wanted to see this Summer!!!!

3) My main man Cal from the Cave of Cool does an excellent job scanning Tumblr for hot chicks. He often posts them in his Tumblr Girls of the Week posts. He also finds Tumblr's of hot chicks with great names, like Violent Blow Jobs, that feature hottie Sam with her huge boobs and silly faces. You do God's Work Cal... God's Work!!!! 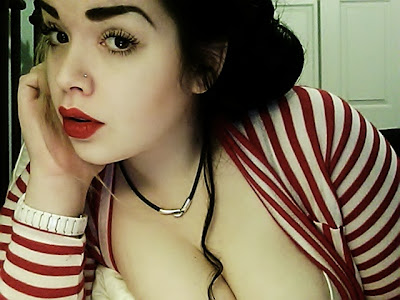 4) /Film has a complete rundown of the Prometheus Blu Ray features. The commercial tells us "Questions Will Be ANSWERED!!!" and there is an alternate ending and beginning to the film included.   I don't know about you guys, but this sounds suspiciously like it is going to prove my point that this film was supposed to be a much more faithful prequel to the Alien franchise then it ended up being,. Jeff... I TOLD YOU!!!!!