Hey kids, I know its been awhile, but I'm finally back with another installment of "Takin You Back… Way Back", the column where I take an in-depth look at some of the more obscure and forgotten toy lines of the 1980's.

Today's topic of reminiscent rumination is a toy line called The Inhumanoids. Released by Hasbro in 1986, The Inhumanoids were subterranean creatures who wanted to (what else?) destroy mankind and take over the world. They were opposed by a group of heroic scientists called Earth Corps lead by Herc Armstrong (whose parents must have known he was going to be a monster-fighting hero-scientist, since they named him that). Weird that this series is named The Inhumanoids and not Earth Corps; I can't think of another toy/cartoon series that's named after the villains. 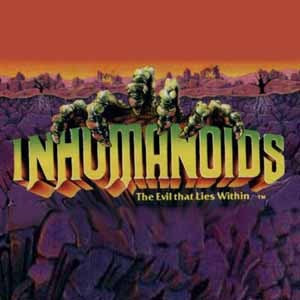 So the story goes that the Inhumanoids were uncovered when a monster encased in an amber monolith was found buried in national park, which is recovered by Earth Corps, who start off as a geological sciences research team. That finding spurs corrupt industrialist (again, did HIS parents know he’d be a corrupt industrialist when he grew up?) to clandestinely uncover a second monster buried elsewhere.  That monster ends up being the giant vine-like creature called Tendril. Shore frees Tendril, who attacks the public unveiling of the amber block in . Tendril releases another monster named D’Compose from the amber and they rampage through the city before fleeing into bay. Earth Corps returns to in search of further clues to the origin of these monsters, and discover the Redwoods, a race of sentient trees, who explain that they are members of a subterranean population known as Mutores, and that their kind sealed the evil Inhumanoids Tendril and D'Compose beneath the Earth ages ago.  Metlar, the evil Inhumanoid leader, remains imprisoned below the surface, paralyzed by the magnetic field of a Mutore duo named Magnokor. Magnokor is a member of another group of Mutores called the Granites, who are creatures of living stone. To make a very long story short, Metlar escapes and the Earth Corps battle the Inhumanoids with help from the Mutores. 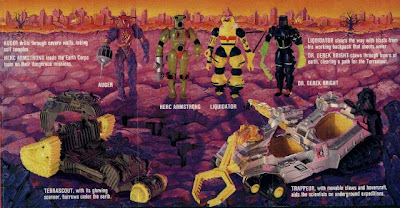 As far as the toys go, Inumanoids were very cool and very unique looking, and I kinda wish I had some as a kid. At around 8 inches tall, the good guys stood apart from some of the more popular toy lines of the time. They were big and bulky, and they all had some kind of weapon/action feature instead of a hand. Any character that had a gun for a hand was automatically cooler in the 80’s, and that’s a fact. The Mutores were also pretty cool, if kind of uninteresting. There’s only so much you can do with a giant animated tree-man. But even given that, they weren’t bad.  Now, as cool as the Earth Corps figures were, the real attraction of this line was the monsters. The Inhumanoid figures were just awesome. Metlar, Tendril and D’Compose were giant – 14 inches tall – and hideous and just screamed “cool”. Actually, to a spoiled 8-year-old, they just screamed “buy me!” 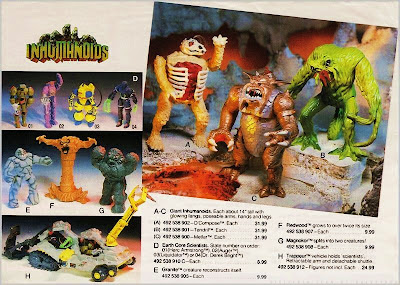 The remaining members of Earth Corps were Auger, Liquidator, and Dr. Derek Bright. Auger was an archaeologist, the team's mechanic and designer of their exo-suits. Liquidator was a chemist whose suit has a spray cannon that shoots all manner of chemical compounds. Dr. Bright was an engineer, and designer of the Earth Corps' high-tech vehicles. 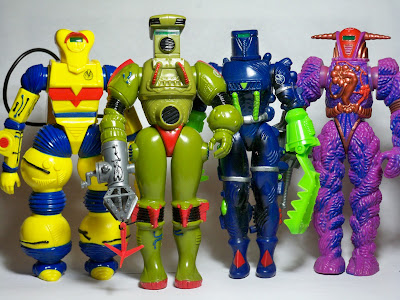 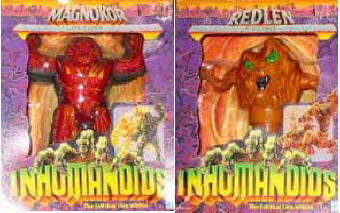 All of the Inhumanoids had a different underground realm over which they ruled. Metlar was like a giant demon-devil thing. With a beer gut. I could just as easily see him sitting back in some giant lava-rock throne, chomping a cigar and ordering his minions to do his bidding as I could see him tearing some hero’s guts out (see what happens when I start writing about toys I didn’t have? The imagination takes over). Anyway, Metlar’s realm was called Infernac, it was all fire and lave and near the Earth’s core. Metlar had an army of animated statues and could spit balls of flaming hot magma. His only weakness was magnetism, which could be used to immobilize and imprison him. Tendril was a giant plant creature with whip-like vines for hands and bearing more than a passing resemblance to Marvel’s Man-Thing (who bears more than a passing resemblance to DC’s Swamp Thing). Tendril could regenerate lost limbs and his severed appendages could even grow an entire new monster. I couldn't locate the name of Tendril's underground realm, despite doing an amount of research extremely disproportionate to the subject I was looking for. No one could ever say I don't suffer for my art. Now, for me, D’Compose was the real star of this trio. The ruler of Skellweb, he was some kind of enormous undead thing, all bones, with some kind of dinosaur skull head. His chest cavity was covered by a hinged rib cage that could open up. He would grab the good guys and shove them in there, imprisoning them an (I think) draining their life force. He could also turn human victims into giant undead monsters just by touching them. D’Compose’s only weakness is sunlight. 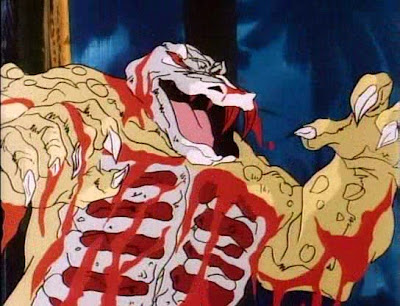 Kinda terrifying for a kids cartoon...

Inhumanoids was part of the Super Sundays cartoon block along with Robotix, Bigfoot, Jem & The Holograms and a few others. Along with Jem, it has the distinction of being spun off into its own series, which lasted a whopping thirteen episodes before it was cancelled.


In the end, like so many other toys we've talked about here in this column, what killed Inhumanoids was the price point. Interesting and awesome-looking unfortunately don't mean as much to a parent as cheap when it comes to features of the toys they're buying their children. The Inhumanoids were thirty bucks a piece. Thirty bucks! In 1986 that was like Nine hundred of todays dollars (yeah, I don't really understand how inflation works, but trust me, it was real friggin expensive for a toy).  My research shows that a second series of Inhumanoids figures was in the works at the time of the line's cancellation. The only character confirmed to reach the prototype stage by an ex Hasbro employee was another Inhumanoid creature called Ssslither. A set of these prototype figures were said to have been sold on Ebay in the early 1990s, but there are no pictures or collectors stepping forward to confirm this, and Ebay didn't exist in the early 1990's, so this is probably, in technical terms, a load of bullshit.

Inhumanoids was a really cool toy series, and I really do wish I had some of them as a kid. A D'Compose did come into my hands later on, but much after I was old enough to really appreciate it (meaning I was too old to play with toys... even for  me). As far as being a forgotten toy line goes,  as always, these things are relative. A google search reveals there are a few enterprising geeks out there who have made modernized Inhumanoids custom figures, and done a really nice job of it. Additionally, DVDs were released back in 2001, but the series was never finished. Oh well, at least we have YouTube.
JoeyEsq is an attorney, a geek and obviously, a reserve member of EarthCorps. When he's not hanging around the Infernac lava pools, he can be found loudly complaining about things on his blog, Perpetual Dissatisfaction
Posted by JoeyESQ at 12:15 PM

Email ThisBlogThis!Share to TwitterShare to FacebookShare to Pinterest
Labels: 80's Toys, Inhumanoids, Taking It Back Way Back, Toys