Mr. Plinkett and the gang over at Red Letter Media became quite famous (or should I say infamous) for their scalding critiques of the three Star Wars prequels. Their diatribes are the blueprint for all Internet complaint videos and are legendary when it comes to geek culture. I always wondered why people love to bash new inclinations of old franchises (the Prequels, Prometheus, Wolverine Origins, etc) while revering the old material as if it were perfect. How come these guys don't pick apart the classics like they do the new films? Maybe because they don't want to admit that you can find fault in just about anything if you look hard enough. Well, Mr. Plinkett has decided to do just that, albeit in a bit of a different fashion. Instead of blasting every frame by frame VIDEO of the original Star Wars in a similar fashion that he did the prequels, Plinkett has created an audio track to accompany the original film. It is 2 hours long and from what I have read over at /Film is a bit easier on the criticism (not surprising there), but my interest is definitely piqued and I will eventually sync this up with the film to see Plinkett's thoughts. I would like them to go old school RLM and do a full on video for the first three SW films though. My guess is they won't because they will then lose credibility when they don't blast silly things like the Ewoks and the most deadly bounty hunter in the world dying via trip and fall.... but that is just my opinion. Check out the embedded audio tack after the jump.... 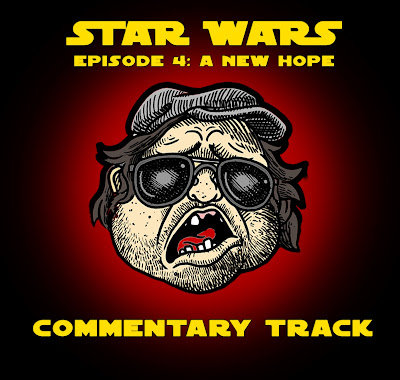