As the self proclaimed "World's Biggest Edgar Wright Fan" I have been eagerly awaiting the third installment in his Blood & Ice Cream trilogy with Simon Pegg & Nick Frost. Shaun of the Dead & Hot Fuzz are two of my all time favorite flicks of all time. So obviously I am super excited to see what they have in store for us in 'The World's End'... and now we have a teaser poster & synopsis for the movie. Holy fucking shit, this one sounds epic. Check out the poster & synopsis after the jump...

20 years after attempting an epic pub crawl, five childhood friends reunite when one of them becomes hellbent on trying the drinking marathon again. They are convinced to stage an encore by mate Gary King, a 40-year old man trapped at the cigarette end of his teens, who drags his reluctant pals to their hometown and once again attempts to reach the fabled pub – The World’s End. As they attempt to reconcile the past and present, they realize the real struggle is for the future, not just theirs but humankind’s. Reaching The World’s End is the least of their worries. 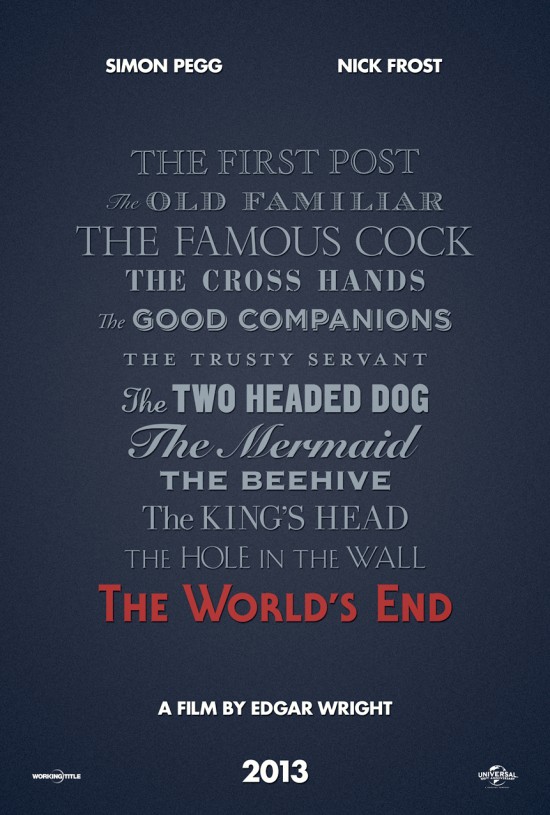 Clearly these ridiculous titles that occupy the majority of the poster are the names of the English Pubs that the gang will try to hit up on this epic bar crawl. We shall soon see. But between this and the epic Ant Man footage that I heard about from this years Comic Con (as soon as it leaks online I am posting it!) it looks like 2013 is gonna be a great year for Mr. Wright & the boys.  I for one can't fucking wait!!!!!