As an 80s baby I miss the days of the horror anthology. At the time we were lucky enough to be blessed with numerous horror anthologies on both TV and on the big screen. TV shows like Tales From The Darkside, Tales From The Crypt, Friday the 13th: The Series, and The Outer Limits were on the air scaring the shit out of me with a different story every episode. Movies like Creepshow 1 & 2, Cat's Eye,  Two Evil Eyes, Body Bags, and film versions of Tales From the Darkside/Crypt all brought the scares to the movie theater and took that extra step that the TV counterparts couldn't pull off. But for a while, horror anthologies went by the wayside. It wasn't until 2007's Trick R' Treat (a favorite of Jeff & I here at CCD) that a meaningful horror anthology hit the screen, and by was it a doozy! That film started the ball rolling on a few more recent projects like Chillerama and even the Grindhouse movie from Tarantino/Rodriguez (when pairing the two movies with the faux trailer mini movies, you get anthology). But now we have a film that is promising to bring it all full circle, and some of Horror's best young talented writers & directors are hoping to make it happen. V/H/S comes to us courtesy of Ti West (House of the Devil), and he is accompanied by talents like Adam Wingard, David Bruckner, Joe Swanberg, and the guys of Radio Silence in this found footage anthology... and boy does this Red Band Trailer look insane!!! The film hits on October 5th. Check out the trailer after the jump...

Here is the official poster: 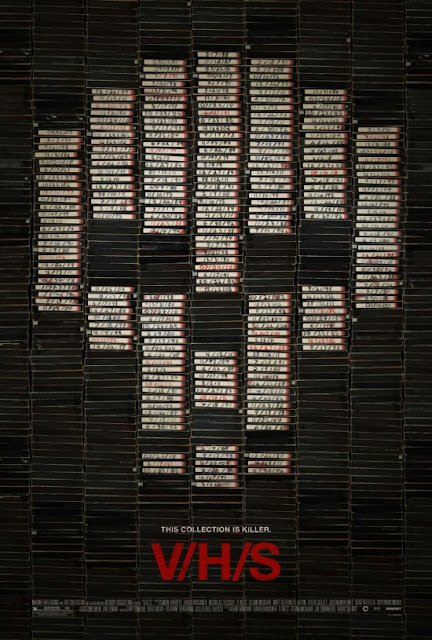