Red Letter Media "Takes On" Prometheus (And By "Takes On", I Mean Roasts In their Very Creative Way!!!)

The gang over at Red Letter Media have made critiquing movies on the Internet an art form, and their reviews and criticisms of major properties are known far and wide. While their rants used to be INCREDIBLY detailed and long as shit, they have improved their ability to cut the critiques down in terms of total time while not sacrificing their intelligent barbs. They also have managed to improve on their level of humor as well This is definitely apparent in their new critique of Ridley Scott's 'Prometheus', a film that is causing many polarizing opinions. You gotta check their review out, it is priceless!!! The guys at Red Letter were also smart enough to release both the full length review (24 minutes) and abridged version of the review (4 minutes), both of which you can see after the jump.... I really like the things these guys say in the long version. If you have the time and want an honest critique of the movie, give this a watch. 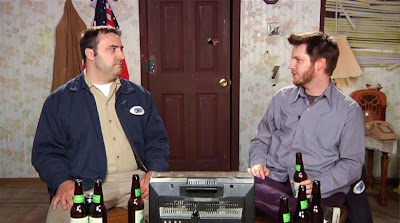