Artist Kaws is an artistic phenom. He is a mainstay on the lips of people who love and worship the underground art scene. he has also crossed over into the mainstream, his images and figures becoming familiar to even casual fans of the art scene. He had a monster sized statue of his most famous piece, "Companion", on display at the Standard Hotel in NYC. And now the artist is about to hit the big time and become a name everyone will know: Kaws is designing a version of "Companion" to be featured as a balloon in this years Macy's Thanksgiving Day Parade!!! Check out the pics after the jump...

Here is what the "Companion" balloon will look like: 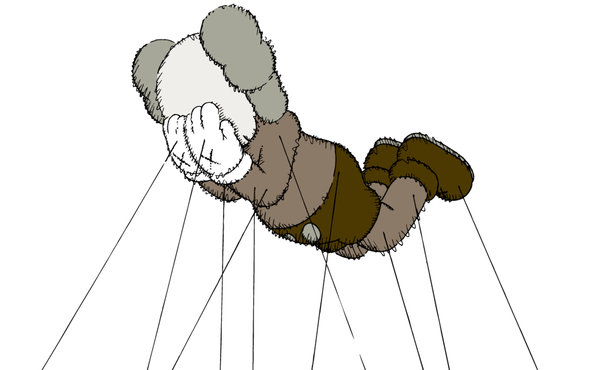 In the New York Times an article has paid out the plans for Kaws's ballon project. What is really cool about this is that Kaws is a native of New Jersey and grew up watching the parade. Now he will get to see one of his own creations up there in the air amongst mainstays like Mickey, Sponge and others. I for one and looking forward to it! This November is going to be KAWS-Tastic!!!
Posted by Mike D. at 8:30 AM