A Game of Groans: A Rant by Joe Esq

I tend not to consider myself the typical geek. I AM a geek, no question about it... I can quote Star Wars verbatim, I have an encylclopedic knowledge of 80's toys, TV, movies and music, and I love comic books and wrestling. But I tend to downplay that aspect of my personality to all but those who really know me. I try to stay well rounded and not let my geekiness dominate my personality. And lets face it, when I say I'm not typical, I mean I'm also in great shape, have an active, healthy social life, and girls absolutely ADORE me (no really, they DO). If you were casting the role of a geeky character in a movie, he certainly wouldn't look or act like me, that's for sue. And I admit, I do tend to keep my geeky tendencies a bit closeted sometimes on purpose, because other geeks freak me out a little. I'm also a lawyer, and sometimes, just for fun, I like to take a less popular stance just for the joy of arguing it (and also because being a nudge and pushing people's buttons amuses the hell outta me). So its with a great level of discomfort that I'm forced to say unequivocally that I HATE this season of Game of Thrones. And I hate that I do. I want to love this show. I want to keep giving it the benefit of the doubt because its presenting a genre I love in a medium where more people will see and appreciate it and most of all, I don't want to be the typical geek ranting abouthow STUPID HBO IS WRECKING EVERYTHING HOW DARE THEY CHANGE MY BELOVED NERD NOVELS ROOAAAARRHULKSMASH!! But the fact remains, the writers are just changing too much stuff from the source material and over the course of this season its had an absolutely jarring effect, tearing me right out watching the show and taking a wrecking ball to my ability to enjoy it.

Be forewarned, there are heavy spoilers ahead. Well, for the novels anyway. Lord knows what the producers of the show have planned, but its starting to become obvious to me that TV series is slowly becoming "based on the novels by George R R. Martin" the same way Ghostbusters was based on the 70's TV series with the gorilla.

Before I dive into this, let me just say that I thought the first season of the show was amazing. It was an absolutely incredible adaptation. Maybe the greatest adaptation from book to screen ever. It cut out a lot of the excess, pared down plot lines and characters where necessary, and told a story that stayed true to the spirit of the source material. And to the story too, for the most part. Sure, much was lost to the realities of shooting a live action TV show on a limited budget. Subtext, background information and in some cases even whole plotlines had to be sacrificed in order to make the show work. But even when stuff was changed, it was minimal, it made sense, and it furthered the story. The story Martin told in the novels. This was helped by the fact that the producers did a phenomenal job casting the show. The portrayals by everyone was pretty much spot-on, the level of performance by all the players was top notch, and nothing I say here should be considered a knock on any of the actors, because for the most part I think the cast has been superb. Unfortunately, no amount of scene stealing has been enough to distract me from the weird, nonsensical and largely unneccesary changes we've been subjected to in Season 2 thus far. I kept grinning and bearing it, but last night was the straw that broke the camel's back for me and no matter how much they reign it in, this story will never be the story Martin told in the novels, because the characters are now damaged.

The main focus of my geek rage is last night's Jamie portion of the story. They basically contrived a scene where Jamie kills Karstark's kid when that's something that happened "off screen" in the novels and could just as easily have been "off screen" on the show. In the books, Karstark's sons died protecting Robb from Jamie in Whispering Wood. This is mentioned offhand early on, and brought up again later when Karstark wants Robb to let him kill Jamie for it. Instead of doing this just as simply on the show, they invent a scene where Jamie kills Torhen Karstark (as well as his own distant cousin - but not before having a fun little heart to heart about tournaments and being sixteen again) while trying to escape captivity. The big problem with this is that at this point, they're supposed to be laying the groundwork to make Jamie more sympathetic. In the novels, Martin does the impossible, he makes you start to relate to the incestuous Kingslayer; almost against your will. The guy who chucked Bran Stark out the window and crippled him becomes almost likeable! One of the keys to this (the fact that he fucks his sister aside)  is we are shown that, in his head, Jamie has tried to act honorably while essentially being brought up as a pawn in a game of oneupsmanship between his father and Aerys. So when he killed the Karstark kids in battle, it wasn't a dishonorable thing. When he slew the mad king, it was to save King's Landing from Aerys planning to immolate everyone. In the show Jamie' s just a jokey, arrogant asshole. Incredibly well played, and one of my favorite characters on the show, but after last night Nikolaj Coster-Waldau isn't really playing the Jamie of the novels. And I'm not even saying the Jamie of the novel WOULDN'T have done just what he did in the show, but they're sacrificing important character beats with no upside to it. 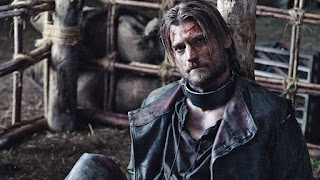 Who will love me now?


Another thing that bothered me about the whole scene is that on a show where budget concerns are so crucial to everything they do (or so we're told everytime some internet nerd complains about some minor change they made) why change the story to a point where they now have to hire actors to play Torhen Karstark and the Lannister cousin Jamie kills when you could leave the story the same and accomplish the same result (dead Karstark kids, Caitlin deciding to free Jamie as an indirect result).
I was also really bothered by the ending because I have to wonder, did anyone who hasn't read the novels believe for a second that those two bodies at the end were Bran and Rickon? They couldn't have, when twenty minutes earlier the writers made sure to have Bran and Rickon hamfistedly point out that "look I know that farm! There are two orphan boys from Winterfell living there! They're our age and look just like us - especially if they're all burnt up!" I really hate it when the plot turns into a sledgehammer, and that's exactly what happened there. 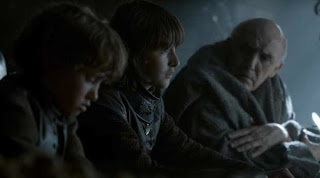 So these two kids would make perfect body doubles for you two? Funny you should bring that up...


Jon Snow's character and his relationship with Ygritte has been pretty much massacred too. The most important part of their first encounter, and why she ends up falling for him, why she vouches for him with the Wildlings later, is HE SPARED HER LIFE AND LET HER GO. Not, she escaped, and then was comically pursued by Jon. Not, they somehow got lost and the other RANGERS of the Night's Watch were unable to TRACK THEM ACROSS SNOW uh, for some reason. And certainly not he got himself captured. Being forced to kill Halfhand and join the Wildlings and sleep with Ygritte as part of doing his duty are essential parts of Jon's character in the books. And that aspect, that depth, is just gone from the character in the show. Gone. And its not coming back. Not without more contrived, hamfisted changes anyway.
Finally, while I admit, the scenes between Tywin and Arya have been superbly acted by Charles Dance and Maise Williams (and were even entertaining when I was able to detach myself from the novels), the scenes also beg the question, WHY THE FUCK ARE THEY HUMANIZING TYWIN LANNISTER? The man is an an asshole! An irredeemable prick of an asshole. He shouldn't be having tender moments with Ned Stark's daughter, or anyone else!


Oh wait, that finally was premature, because I really kind of hate that they explicitly showed Stannis fucking Melisandre instead of keeping it vague, I hate that they replaced Jeyne Westerling with some made up chick from Volantis (even though the actress playing her is fucking stunning) and I hate that pretty much Danerys's entire storyline from the Red Waste and Qarth is nothing like the book. The Qarth in the books is like something out of a fairy tale. What the show gave us is fucking boring, up to and including the part where Emperor Palpatine and his clones kidnap the dragons. Oh yeah, and as Mike D pointed out, no Jojen and Meera Reed = Epic Fail.


So there you go, a geeky rant from a guy who likes to pretend he's not a geek. I'm interested to know what people think. Debate me even. Convince me I'm wrong. Please! I want to love this show again like I did last year. Oh, and just to end on a positive note, I will say that the dragons look pretty kick ass. 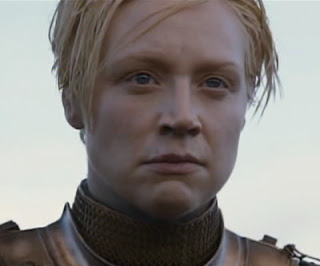 JoeyEsq can be found regularly trying to convince you all he's not a geek on his own blog, Perpetual Dissatisfaction
Posted by JoeyESQ at 10:44 AM