The original 60's Batman TV series was a camp classic, filled with guest stars and word bubbles describing the action. It is one of my fondest memories of TV watching as a child... anywho, the show spawned a full length feature that is a dream come true for a fan of the show because it is like three episodes in one and features all four of Batman's most notorious villains (Joker, Penguin, The Riddler, and Catwoman). It also contains one of the most memorable "Bat-Moments" of all time in which Batman is attacked by a shark and tries to fight it off with his bare hands. He is only successful in ridding himself of the shark when Robin passes him a can of "Shark Repellent"... it is so ridiculous that it has become a touchstone moment in pop culture history! T-shirt artist Glennz decided to use this scene as inspiration for his newest shirt, "Defective". Great shirt in memory of a great team... 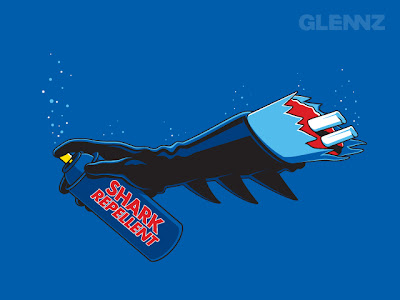 And here is the original scene:
Posted by Mike D. at 8:54 AM