The trailer for Danny Trejo's new flick 'Bad Ass' has been making it's way around the Internet, and it is sparking all types of controversy. Is this a real movie? is this really gonna happen? Can a film possibly be THIS BAD ASS? Trejo looks like he is going even more over the top than he did in Machette... and that is WAY over the top. But on another note, I think this is exactly what Trejo should be doing. These movies are wacky, look like they are relatively inexpensive to make, and are putting Trejo in a starring role instead of being a supporting character. Considering the success of grindhouse-type fare such as Hobo With A Shotgun, Death Proof and Machete in recent years, I think this would go over gangbusters. Enter in Ron "Hellboy" Pearlman and Charles "Roc" Dutton into the mix and this movie looks unreal. What do you guys think? Click after the jump to view the full trailer and leave some comments on the bottom of the page... 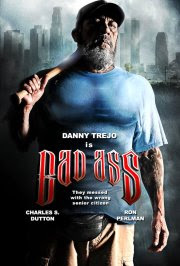 This is "Epic Beard Man", the viral video that seems to be the basis for Bad Ass. You have to watch this video. It will be the best 3 minutes and 21 seconds of your day. Sick!!!