The Kindle Fire Is Here To Change The World... One Tablet At A Time!!!

November 15th, 2011 may be a day that goes down in history... or at least the history of the tablet wars. Apple is about to get it's first serious challenger in the form of Amazon's Kindle Fire. All of the other tablets that have hit the market so far have been over-hyped and failed to make a dent on Apple's stranglehold on the market. No tablet has challenged the Ipad's efficiency and capabilities, and the Apple App store is just phenomenal. So what makes the Kindle Fire so different? Well, lets talk about that after the jump.... 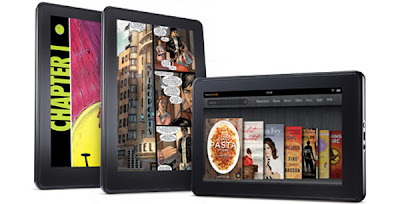 Well, here is the biggest feature the Amazon Kindle has to offer... the price! It is retailing for $199 bucks, less than half the price of it's Ipad brother. The biggest drawback of taking a shot at another tablet has been the fact that the cost is relatively the same as the Ipad itself. Why take a chance on the Motorolla Xoom tablet (which I hear is really good) if it is THE EXACT SAME PRICE as the already proven Ipad? If you are gonna drop $500 bucks or more on a niche item, you want to get the best item you can. For $199, it is a lot easier to take a shot. Not to mention that this is a Kindle, which is a proven product that has Amazon as a backer. These are sure to attract customers who are already in the Kindle family.


Also, Amazon has constructed a diesel content market to attack I-Tunes and the Apple App store. First, they started Amazon Prime, which ties in streaming 10,000s of movies and TV shows with free shipping on all Amazon products you order off the site. At just $6 bucks a month, this service is sure to appeal to tons of people who already order a lot of stuff off of Amazon, one of the biggest Internet retailers out there. They have also adopted the Android App market, which is starting to rival the Apple App store as well. You got all you usual suspects, including Netflix, Pandora, games like Angry Birds & Words With Friends, and other stuff we love. And it promises to be the smoothest E-Readers ever to hit the market... magazines, newspapers, and books all at the touch of your fingertips!

Amazon is also pitching the operating system, Silk, as the deal closer. It is supposedly faster than the Ipad 2's processor and the task management on the device is supposed to be seamless... hence the smooth as SILK name for the OS. As far as I am concerned, I have yet to enter the tablet market or the E-Reader market, so I am going to take a flier on the new Kindle. For $199 and since I have a grad school graduation gift coming from my girlfriend, why not take a shot? I'll be getting it this week, so I'll check back in early next week and let you know how its going. Amazon is in the building... Apple better watch it's back!!!
Posted by Mike D. at 10:36 AM