Lets face it... now is a great time to be  a comic geek/movie fan. Marvel finally got their shit together & has been killing the movie market over the last 5 years leading up to next summers compilation blockbuster "The Avengers". It is going to be epic. While DC has been able to make some great animated features and Batman is doing great, the rest of the companies forays into film have not gone so well. Will we ever get a team movie starring the Justice League? I doubt it. But artist Daniel Morpheus has given us a sneak peak on what this movie could possibly look like, using comic artist Frank Quietly's original team drawing as inspiration. Check out his awesome cast choices for the other team members that have yet to make a silver screen debut. Both a comparison shot and the full piece are available after the jump. 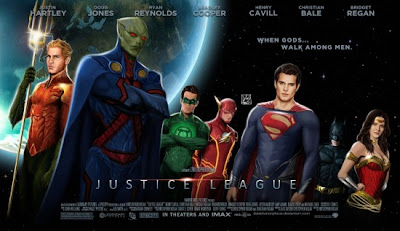