Karl Urban Is Judge Dredd & I Am Offically Excited 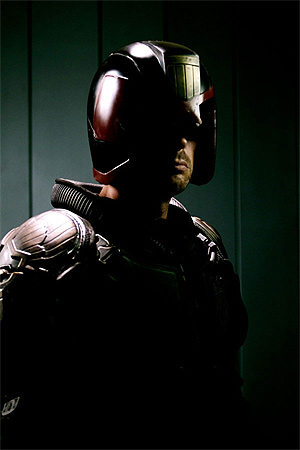 I was thrilled that there was someone out there besides me who wanted to see Judge Dredd get a second chance on the big screen. The first attempt by Stallone & Co was a farce compared to the source material, and the campy sendup that resulted  became a clear road map on "How Not To" adapt a comic book for the big screen. But the character of Dredd is so awesome that I had hoped to see him get another shot. Then Karl Urban (McCoy in JJ Abram's Star Trek) got tapped for the part and I was ecstatic. I have seen some action stills from the movie, but this is the 1st official profile shot of Urban (courtesy of Empire Magazine) with the Judge helmet on and I am speechless. This looks wonderful. I can't wait.. the film opens in December. see you there!!!
Posted by Mike D. at 7:58 AM