Oh hello.  What’s this?  What do we have here, you ask?  Another installment of Trailer Trash Talkin’?  FROM 1981 YOU SAY?!   Well burn my clothes….
Now, the issue I seem to have with trailers from the 80s is that they’re put together in such a way; it’s like completing a really shitty puzzle.  After you finish it, you have no idea what to make of it.  There’s just no god damn reward.  For example, watch this doozy starring a handsome Dennis Quaid, a young Kristy McNichol (Best known, in my mind, as Barbara from the 80s TV show Empty Nest) and Luke Skywalker…..er, um… I mean Mark Hamill. 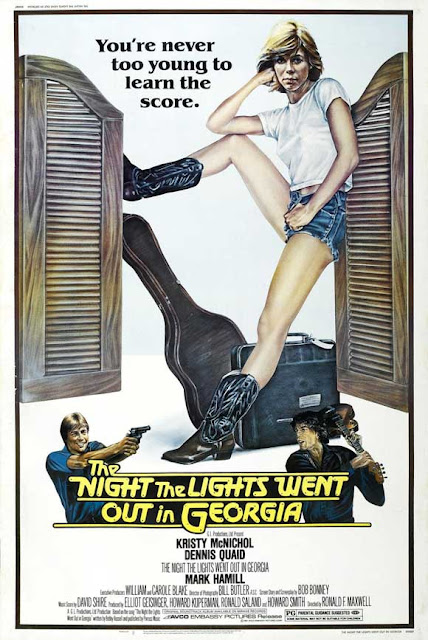 The Night The Lights Went Out In Georgia – June 5th, 1981
Starring Dennis Quaid, Kristy McNichol, Mark Hamill
Directed by Ronald F. Maxwell (known for crap, according to IMDB).
“He’s got the talent.  She’s got the brains.  Together, they’re one mean team.”
That’s nice.  That could mean anything.  He probably sings the best songs about loving guys!  Yea!  And she probably has the best brains when it comes to givin’ discounted lap dances at the local doohickey!  Alright!  Hey, maybe I’d see that movie instead….
The film’s title apparently has been lifted from a 1972 hit song, which isn’t even featured in the film.  It was actually rewritten and re-recorded instead.  A useless fact for all you sharp tacks out there….
Moving on….released that same week was another installment from some classic stoners….yep you guessed it (yea, probably not)….Cheech & Chong! 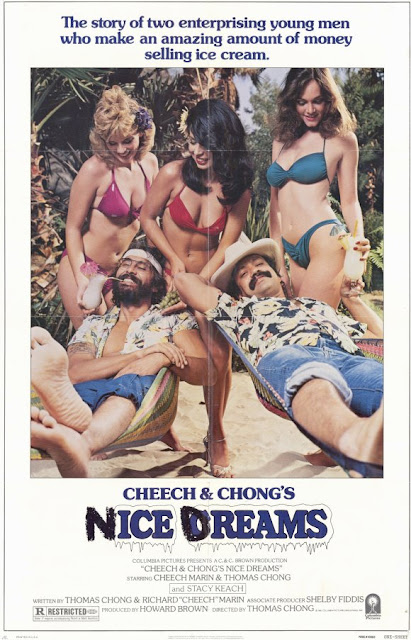 Cheech & Chong’s Nice Dreams – June 5th, 1981
Starring Cheech Marin, Tommy Chong, & Sandra Bernhard?  Listed as “Girl Nut”  ß Haha!
Directed by Tommy Chong
This trailer is more of a TV spot preview.  Couldn’t find an actual theatrical trailer.  But still, if I was 30 in 1981 (and how I wish I was)….and I saw this on my TV….I wouldn’t know what to make of it.  I mean really!  What’s going on here?  Do YOU know? Really?!  Yes, really.
And that’s that.  Do you remember any of these films?  How do you think they would fair in today’s box office?  Let us hear your rambles!  Praise be to Jesus!  And all of those born in the glorious year of 1981.
Posted by Mike D. at 11:08 AM

Email ThisBlogThis!Share to TwitterShare to FacebookShare to Pinterest
Labels: 1981 or Bust, Cheech and Chong, KMG, Kristen Grillo, Movies of 1981, Nice Dreams, The Night The Lights Went Out In Georgia, Trailer Trash Talking