I saw my good friend Joe Esq last week and asked him if he wanted to go see the Hangover 2 that weekend. After all, everyone loves the first movie and I had been eagerly anticipating the second installment. But Joe just looked at me while shaking his head no, a smirk on his face. I couldn't believe it... so of course I asked "Why Not????". Joey just smiled at me and in the snarky way that only he can speak he muttered "Because I liked better the first time I seen it... when it was called The Hangover". I had to smile... sure, there was a potential of the Wolfpack rehashing the exact same style of adventure in part 2, but would they actually do that? I went to see the movie later that weekend, and my short answer is: Yes... yes they can. Exactly the same situations. EXACTLY!!!!!! 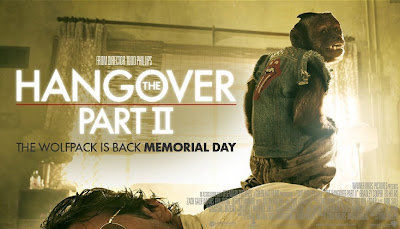 Now before the hate spews forth, let me say that there were a few minor laughs and some funny shit in the movie. But since it has its own high expectations based on how hysterical the first one was, it doesn't live up. Not even close. I can't understand it, since both are written and directed by the same team and they feature relatively the same cast. How can it not be funny? Oh yeah, I know how: By making the exact same movie, scene for scene. Don't believe me? Here are 5 (there are many more, but these were the ones that stuck out to me) parts of the film that mirror something from the first film. SPOILERS AHEAD!!!!!!


5 Reasons Why The Hangover 2 Is the Same Movie as Hangover 1
These are just the worst offenses. Teddy loses a finger like Stu lost a tooth, they spend a wild night in the strip club (this was funny, the tranny fucking Stu was the best part of the movie), they have a wild motorboat ride to the wedding instead of the wild car ride, Allan gives awkward speeches, there is a crazy wedding band (although not The Dan Band, who stole the fucking movie while performing Candy Shop), Allan drugs the gang on accident AGAIN, Yada Yada Yada. All in all, it stunk. Some funny parts, but it was supposed to be much more then that. Maybe it will grow on me after a few viewings. I doubt it... should have listened to Joey! Watch it at your own risk and prepare to be disappointed.
Posted by Mike D. at 12:05 PM

Email ThisBlogThis!Share to TwitterShare to FacebookShare to Pinterest
Labels: 5 Reasons Why, Joe Esq, Movies That Suck, The Hangover, The Hangover 2, Zack Galifianakis