The New Thundercats Show Is Shaping Up Nicely.... 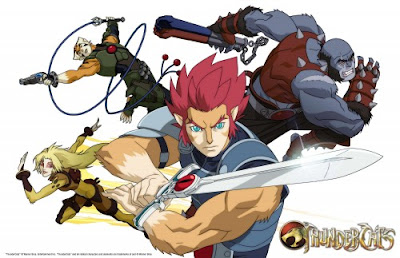 In case you guys missed it (like me), about a month back the folks over at Cartoon Network released a 2.5 minute trailer for their upcoming Thundercats cartoon series. I liked the anime style look of the characters that was released last year, so I was looking forward to this one. See the footage for yourself:

Well, in the past few days some more footage from the show has been released... and I think it lokks great!!!! There is no embeddable version of the new footage, but you can click here to head over to Cartoon Networks page and watch it. If you are a fan of Thundercats, I suggest you do! After you have seen the new footage, come back here and tell me what you guys think about this new series in the comment section below. I am ready for it... are you? Thundercatsssssssssssss HOOOOOOOOO!!!
Posted by Mike D. at 12:50 PM